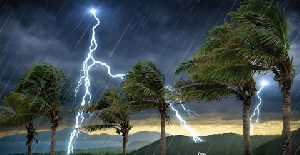 A rainstorm is expected to hit certain parts of the country today, Thursday, 4 March 2021, the Ghana Meteorological Agency has announced.

Places likely to be affected include “Eastern, Volta, Greater Accra and Central region.”

“Few areas over Ashanti and Western regions are also expected to be affected by the storm”, a statement by the agency said.

It is expected that the storm will be accompanied by “strong winds, thunderstorms and lightning flashes” between 4 and 8pm.

This ‘photopreneur’ details how smartphones have disrupted traditional photography

“NAM1 Should Be Jailed And Not Akuapem Poloo”-Showboy Reacts [Video]

“I Will Keep Posting My Bikini Pictures”- Efia Odo Insists

Ramadan: Be assured of our moral support as you intercede for Ghana - NPP Secretary urge Muslims