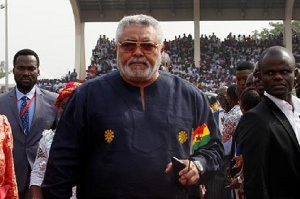 Tributes continue to pour in for former President Jerry John Rawlings as his final journey starts today with a requiem mass at the Holy Spirit Cathedral in Accra.

Rawlings’ former aide, Kofi Adams in his tribute on the floor of Parliament late this week advanced what he identified as a key law during the Rawlings regime. The Interstate Succession Law, PNDC Law 111 of 1985.

“Indeed, one thing that we can never forget about president Rawlings is one key law that helped a lot of disadvantaged persons especially our mothers who lost their husbands who didn’t have a will – the Interstate succession law, PNDC Law 111.

“Indeed, women who lost their husbands had properties taken away and thrown out of their homes almost immediately. But through this law and the intervention, children and mothers from such homes got something to be able to take care of their children,” he added.

Parliament will file past the remains of the former president on Tuesday, January 26. Rawlings was founder of the main opposition National Democratic Congress, NDC. The party held a vigil in his honour shortly after he passed in November 2020.

Ghana promulgated the intestate succession PNDC Law 111 in 1985 as a substitute for indigenous systems of inheritance after death.

PNDC Law 111 played a significant role in protecting the inheritance and property rights of women as far back as 1985, one-time Minister of Gender, Nana Oye Lithur said in 2016.

At the time, she expressed gratitude to former President Jerry John Rawlings and former First Lady Nana Konadu Agyemang-Rawlings for their “vision, foresight, courage and effort” in the passage and enforcement of the law.

Every potential business in Eastern Region is priority

Why I Wore Gigantic Shoes To The 14th Headies – Laycon

Every potential business in Eastern Region is priority – Seth Acheampong

Businesswoman in court over GH₵125,000 fraud and issuance of dud cheque

VIDEO: What Did You Gain After Spewing Such Lies About My Daughter And Breaking My Spirit?