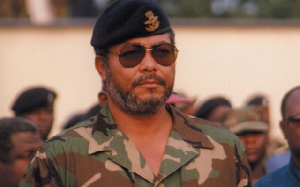 The Ghana Armed Forces (GAF) has said that the late former President Jerry John Rawlings had a deep sense of patriotism and nationalism.

Air Commodore Jacob Ashrifie, who read a tribute on behalf of the Ghana Forces during the final funeral ceremony of the late former Ghanaian leader on Wednesday, January 27 said “He had a deep sense of patriotism and nationalism, he was very considerate of others no matter their status in society.

“His spirit was unbreakable and could never be affected by any challenging act. He will be remembered as the longest-serving head of statues of Ghana and the architect of the fourth republic has been the most endearing.”

She said Mr Rawlings supported the brawl for women’s right in the country when he was the head of state and even after leaving office.

Mrs Konadu Agyemang Rawlings said these in a tribute read on her behalf by one of her daughters, Princess Amina Agyemang Rawlings at the final funeral ceremony at the Black Stars Square on Wednesday, January 27.

“With your help and support we were able to fight for the rights of women a reality,” Amina said in her behalf.

The biography of the late Flt Lt Jerry John Rawlings which was read by one Eric Gbeho during the final funeral ceremony at the Black Stars Square in Accra revealed that the late former President worked to bring governance close to the people.

He added, “He encouraged citizens to participate in local governance.”

The 4-day funeral ceremony started Sunday, January 24 with a requiem mass service held for him.

Coach miner Castro about the Europa League: Ready to take on any opponent
Moreno has 6 goals in his last 5 games for Villarreal
Coach of Zagreb: In the matches with Krasnodar, we showed how good we are. Only the implementation needs to be worked on
Ole Gunnar Solskjaer: Manchester United are waiting for three important weeks, matches with Chelsea, Leicester. We are confident in ourselves
Gattuso on Granada: If Napoli were killing time like this, we would have been smeared in the press
Dzeko is Roma's top scorer in European competitions. He scored the 29th goal and beat Totti
Mikel Arteta: We got to give them two goals. Would hate to fly out of the Europa League
Source https://www.ghanaweb.com/GhanaHomePage/NewsArchive/Rawlings-spirit-was-unbreakable-GAF-1165099

We need a real budget for housing - Freda Prempeh

I Support LGBT, You Are Not God to Judge

Satellites advance to semi-finals of CAF Under-20 AFCON

El Salvador has been officially certified as malaria-free

I Have 6 Children, 11 Grandchildren

Farmers and other stakeholders trained on Agroecology in WR

Ama K Abebrese Sides With Gays and Advocates For Their Rights » ™

Commuters stranded as parts of Accra get flooded after heavy downpour

Why don't you go to Saudi Arabia to legalize LGBTQ+ there? - Private Lawyer blasts Diplomats

Lesson from Election Petition: Use whatever means to have EC declare you winner - Mahama's aide

No one shall stand against you – Diana Asamoah endorses Alan for 2024?

Sarkodie Wishes Criss Waddle As He Celebrates His Birthday Today

Kingsley Schindler believes he can do better at Hannover 96

Ama K Abrebrese Reacts To The Legalization Of The LGBT Community In Ghana, Asks For More Understanding Of Their Plight

Freda Prempeh: We need a real budget for housing

FG To Present Supplementary Budget For COVID-19 Vaccines In March

We need a real budget for housing

Here is the life span after vaccination

Video: No one shall stand against you – Diana Asamoah endorses Alan for 2024?

Mustapha Ussif promises to be Minister for all

The people giving the Covid-19 vaccine shots are seeing hope, and it’s contagious

Woman arrested for having s3x with 13-year-old boy