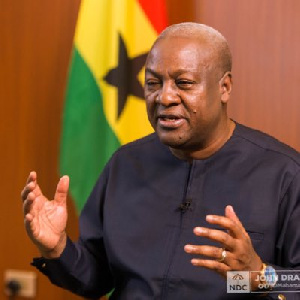 John Dramani Mahama has said that the refusal of EC Chair, Jean Mensa, to testify in the just ended Election Petition leaves a bad precedence for the future.

Speaking publicly for the first time since the Supreme Court declared its final verdict on the case, which reaffirmed the presidency of Nana Addo Dankwa Akufo-Addo, he said that her refusal to testify was surprising and should not have been the case.

He explained that many Ghanaians looked forward to seeing her in the witness box but their requests were rejected by the court.

"Ghanaians looked forward to seeing the EC Chair testify in this case but that did not happen... the refusal of the EC Chair to testify leaves a bad precedence for the future," he said in the presser monitored by GhanaWeb.

The Supreme Court, led by Chief Justice Kwasi Anin-Yeboah, delivered a more than two-hours long verdict with the concluding words, "your petition is dismissed without merit."

Ander Herrera on Super League: Dreams will come to an end. I love football and I can't keep quiet
Podolski on the Super League: A disgusting project. I am disappointed that my former clubs are involved
Atalanta and two other clubs have called for Juventus, AC Milan and Inter to be excluded from Serie A
Murphy on Super League: The American model will not work in English football, although clubs with owners from the United States may like it
Leicester and Southampton played out the FA Cup semi-final. This will be English football in the Super League
Tottenham sacked Mourinho
Koeman will remain Barcelona coach. Laporta will support him after winning the Spanish Cup

UEFA executive to meet as planned after Super League announcement