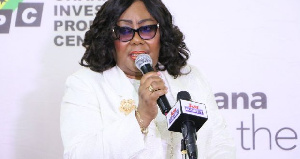 Madam Jemima Oware, the Registrar General has revealed her office is awaiting orders from the court before making further payment to customers of defunct fund management companies (FMCs).

According to her, these court orders form part of the liquidation process for the defunct companies.

GhanaWeb monitored an interview she granted to Citi Business News, in which Madam Oware stated: “For our end, we have finished our bit of class and creditor meetings, which was done at the end of last year. This year, we haven’t held any yet. I am waiting for a few more orders from the court. Once I get that, then I’ll have another round of creditor and class meetings.”

“But the government gave out a partial bailout package to all those companies that have not as yet received orders to wind them up. At least they’ve gotten a partial bailout of GH¢50,000. That is currently ongoing. That is why there is a bit of calm on that front. But I’ll definitely be having a round of meetings again.”

Madam Oware added that her outfit upon the court orders will make a determination of their next line of action, which will include the holding of further creditor deliberations.

In November last year, the Securities Exchange Commission (SEC) declared that government had granted authorization for a partial payment structure to remaining customers amounting to GH¢50,000.

SEC through a statement explained that the modalities for payment would be done while the court processes for liquidation continue. Government on its part indicated the payment would be facilitated through the Amalgamated Mutual Fund PLC under a partial bail out scheme.

Disneyfication of football. Where did the Super League come from?
Carragher on Super League: I'm sick of Liverpool's reputation being so damaged. And the shameful capitalism of Manchester United does not surprise me
De Bruyne will miss the game against Aston Villa. The severity of the injury has not yet been determined
Ander Herrera on Super League: Dreams will come to an end. I love football and I can't keep quiet
Podolski on the Super League: A disgusting project. I am disappointed that my former clubs are involved
Atalanta and two other clubs have called for Juventus, AC Milan and Inter to be excluded from Serie A
Murphy on Super League: The American model will not work in English football, although clubs with owners from the United States may like it

Bawumia is a gem, he wowed me after just one lecture - Ama Busia

Today in 2018: I'm doing better under Akufo-Addo than I was under my brother - Ibrahim Mahama

Baba Rahman flying after another impressive showing for PAOK