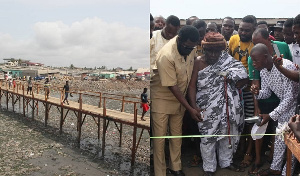 Some residents of Ablekuma West and South constituencies in the Greater Accra Region have described the newly constructed bridge by Oko Vanderpuije as "nothing to write home about."

The former mayor of the capital city commissioned the new wooden bridge after the old bridge was washed away by floods last year.

According to the residents who spoke to GhanaWeb's video journalist Kwame Adzaho-Amenortor, the newly wooden constructed bridge can only last for few months.

The residents who are not pleased with the project said the MP could have done better for the people of Chorkor and Shiabu; adding that the bridge might collapse once the rains set in.

Charles Bill who registered his disappointment to GhanaWeb said: "I'm not satisfied with it because what they've done right now is nothing to write home about, it's just going to help us with a couple of times…so they just have to change it for us."

An elderly man Christopher who leaves in the community also said, "...formally he was the mayor of Accra and he knew everything about this Chemu lagoon, he should have done better for us during that time...truly he has failed us."

GhanaWeb spotted some youth in the area stationed on the newly constructed bridge taking money from the commuters who ply the bridge.

The Chemu lagoon is one of the polluted water bodies in the city; it connects to the estuary at the sea at Chorkor in Accra.