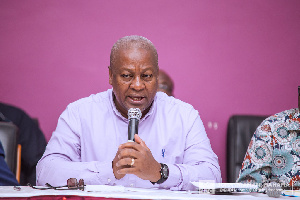 The petitioner in the 2020 Election Petition, John Dramani Mahama, has reacted to the Supreme Court of Ghana ruling on his petition.

The apex court by a unanimous decision dismissed the petition brought before it by former president Mahama, who was flagbearer of the National Democratic Congress (NDC) in the 2020 elections.

According to the 7-member panel presided over by Chief Justice Kwasi Anin-Yeboah: “the petitioner has not produced any evidence to rebut the presumptions created by the publication of CI 135. We have therefore no reason to order a rerun. We accordingly dismiss the petition."

In his first public reaction to the ruling hours later, the former president tweeted he would be addressing the nation at 6pm adding the hashtag: #Respectmyvote.

Even though the message is unclear, Ghanaians are waiting to hear what the petitioner has to say after the court refused to grant him his request of a rerun of the last elections.

What did we learn about Super League on Monday? Bayern and Borussia will not be there, the players and coaches have not been told anything
Milner on Super League: The players do not have the right to vote. The current system is very good
Leeds striker Bamford on Super League: This is wrong, we are in shock. The noise is startling. Sorry it doesn't work that way with racism
Klopp on Liverpool in the Super League: I'm used to the owners making decisions without me. I feel responsible for the club's relationship with the fans
Non-Super League clubs are promised 400 million euros in solidarity payments. From the Champions League they receive 140 million
Milner on Super League: I don't like it. I hope it won't happen
Leeds tweet about 1-1 with Liverpool: Equalized in the match against a Super League team in the end

Bawumia is more than qualified to lead NPP in 2024

Offinso North: Parents urged to collaborate with teachers to bring out the best in children

Parts of Accra to experience water interruption from Thursday

Akuapem Poloo might lose her life in Prison -Prophetess Sarah

Ghanaians are too emotional – Edem’s explains why

Only Mahama can win power for NDC – Party advised

Give us the cars you promised

Asakaa Boys To Embark On An Europe Tour

Give us the cars you promised - Okada riders to Bawumia

Go To Hell And Tell The Devil About It!

While Crucifying Her, Remember To Reward Her For Helping A Street Boy With Money For Food

“Why Raise Funds For Akuapem Poloo’s Son When His Father Is Alive?”-Counselor Lutterodt Quizzes [Video]

Derek Chauvin behaved as any ’reasonable police officer’ would, his lawyer says in closing arguments

Upper West: Over 10,000 pupils in Jirapa attend school without furniture

Clergyman urges Ghanaians to show love towards one another

Governor has no social media accounts

Where Is The Father Of Poloo’s Son, Raising Funds Is Useless

[VIDEO] ‘I Don’t Trust Anyone’

We Married After 3-4 Months Of Dating- Dr. Ernest Ofori Sarpong Reveals How He Met His Wife » ™

Arrest all involved in Akuapem Poloo’s nude photoshoot too – Pundit

Water supply to parts of Accra to be cut for repairs

There may be serious ramifications over military attacks on La youth

Man charged with murder of Ghanaian in US

Apostle Adjei who threatened Jean Mensa case adjourned to May 17

Alan speaks on creation of a Ghana-Canada Business Council