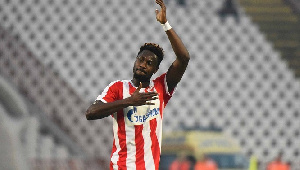 Ghana forward Richmond Boakye-Yiadom out of good gesture has decided not to report Red Star Belgrade to FIFA over unpaid wages and bonuses amounting to 250,000 euros.

The 27-year-old left the club in December with monies owed him for more than six months.

With the coronavirus pandemic hitting the finances of the club, the Ghanaian International has told the club to write off the debt.

The former Juventus striker confirmed this in an interview,“Yes, it is true I left the money with them. Red Star is my home and this is also a time to give back to the club after the opportunity they gave me. I am very grateful”.

Boakye-Yiadom left the Serbian giants after the expiration of his contract in December last year.

He enters into the history books of the club as the third foreign player with the most goals.

Boakye popularly called ‘Bocko’ scored 60 goals in over 100 appearances for the white and red army.

He won two Serbian Premier League titles in his four- year stint with the club.

Boakye-Yiadom is currently a free agent with clubs from Euro

Dzyuba supported Pyotr Yan on the eve of the fight with Sterling at UFC 259
Simeone on the title race: They said that Real Madrid and Barca have no chance, but look where they are now
Willian made an assist in Arsenal's third match in a row
The March matches of the South American selection of the 2022 World Cup can take place in a bubble in a European city
Zidane on Benzema before the derby: We won't take any chances. Those who are 100% ready will play
Can you guess a coach based on his career as a player? It's easy with Zidane - but with Flick and Gasperini?
Zidane is categorically against Bale's return to Real Madrid (Defensa Central)