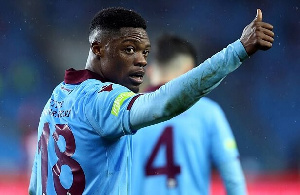 Ekuban, who has a year left on his contract with the Black Sea until 2022 has become a subject of interest for several clubs including Genoa and Sampdoria following his explosive performance in the just-ended season.

He scored 10 goals in as many matches as he featured for the club.

According to French news outlet Foot01.com, Saint-Etienne who is planning to reinforce the attack is interested in signing Ekuban.

Saint Etienne is preparing a 4 to 7 million euros to offer for the Ghanaian forward.

Atalanta wants to buy Demiral from Juventus at the request of Gasperini. Negotiations are underway with Turk's agents
Sulscher about the Monitor Lizard: I am very happy, Manchester United have been following him for a long time. We will have more options for the game
Juventus is discussing the transfer of 19-year-old Caio Jorge from Santos. His contract will expire at the end of the year
Roma rents Shomurodov with a mandatory purchase for 16-18 million euros. Contract - until 2026
Milan is ready to extend the contract with Kier until 2023
Chelsea and Kunde agreed on a salary of 4 million euros plus bonuses
Overmars about Onan: There have been no contacts with Lyon for a week. There were no problems with Arsenal at all

Vaccine hesitancy: Covid-19 could cause male infertility and sexual dysfunction

Don’t compare me to Moesha, we have different lives to live – Hajia 4real

We’ve not received a penny for Olympic Games

Black Stars receive US$40,000 support from Huawei after President's appeal

Lose your game and get GHS5,000 each – Elmina Sharks make revelation about German betting syndicate

We’ve not received a penny for Olympic Games - Paralympics Committee

Koku Anyidoho runs to court to challenge his dismissal from NDC

UTAG begins nationwide strike on August 2 over conditions of service

I was approached by a betting syndicate to fix a match for $30,000

Koku Anyidoho turns pastor after being expelled from NDC

Coronavirus: Why don’t we have OPDs to treat patients?

Ghana’s prosperity is in the hands of Bawumia and Napo

NPP to sanction members who campaign for Bawumia, Alan, others

I would love to have a song with Diana Hamilton – Kidi

I was approached by a betting syndicate to fix a match for $30,000 - Elmina Sharks GM

Koku Anyidoho turns pastor after being expelled from NDC - A Plus

NDC to seek Stay of Execution

Coronavirus: Why don't we have OPDs to treat patients? - Kwesi Pratt

NPP to sanction members who campaign for Bawumia, Alan, others - Buaben Asamoa

Moesha Deserves Whatever Is Happening To Her, And Will See More -Leaked Audio Of Moesha’s PA Drops

Have no idea how your cat is feeling? There’s an app for that

Assin North case: We have been vindicated

When are you paying CK Akonnor

Attacked with their own weapons, racially-abused and left fearing for their lives

Assin North case: We have been vindicated - Majority in Parliament

GRA Records GHC212m Revenue Shortfall In First Half Of 2021

‘I will play for Hearts of Oak next season’ – Ofori Antwi

Report: Hundreds of North Koreans stay behind in Russia during pandemic