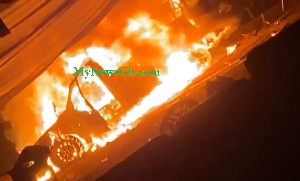 The National Organiser of the New Patriotic Party (NPP) Sammi Awuku and some Northern Regional Executives of the party escaped another accident in Tolon some few hours ago.

MyNewsGh.com has confirmed that a Tundra vehicle carrying their PA system suddenly went up in flames in the middle of the crowd where party supporters had gathered to be addressed.

The incident happened at the Tolon station around when the National Organiser, Regional Chairman and the Parliamentary candidate were expected to address the multitude of supporters gathered there.

The vehicle which was parked in the middle of the station with supporters and constituents already in attendance to listen to the National Organiser and the Regional Chairman suddenly caught fire with people running for their lives. The cause of the fire is not immediately known.

The National Organiser and the team had left the Palace of the Tolon Naa and heading towards the events grounds with just a few meters away when the vehicle went up in flames accompanied by some explosion.

The Personnel of the Ghana Fire Service were at the scene to bring the fire under control.

The National Organiser, the Regional Chairman and the Parliamentary Candidate are reported safe but were forced to cancel their scheduled event in the town. They had earlier visited four other communities within the Constituency.

Ex-President of Barca Laporta will take part in the new elections
Antonio Cabrini: Maradona would still be alive if he played for Juventus. The love of Naples was strong but unhealthy
Ferguson on Rashford's charity: Fiction for a young man. He should give me some advice
A Preston player who twice touched an opponent's genitals was disqualified for 3 matches for aggressive behavior
Atalanta Director: everything is fine with Miranchuk, there are no symptoms of coronavirus
Kovid mocks the Latvian championship: the team got only 8 people (but still did not finish the match)
Gerard Pique: We all hope that Messi will stay at Barca
Source https://www.ghanaweb.com/GhanaHomePage/politics/Sammi-Awuku-others-escape-another-accident-vehicle-goes-up-in-flames-1091941

We are not oblivious of the enormous tasks ahead

‘I Don’t Care About Who Talks About Me’ – Bobrisky

First, Second Deputy Governors of BoG inducted as honorary fellows of the Institute of Directors-Ghana

“Power has changed hands, I be number one” – Burna Boy tells his Junior colleagues

Akufo-Addo is best for you, vote for him again – Kufuor to Ghanaians

‘How Can You Be Angry That Someone Is Happy’

Nigerian man charges N38,000 per day to single ladies who need a fake boyfriend to flaunt during holidays (Photos)

Some 193 to take part in special voting in Akatsi South

Free SHS and PFJ are my biggest achievements – Prez Akufo-Addo

“Compensate Your Wife With A Car And Go For Mental Screening”

Government is committed to the welfare of Zongo communities – Veep

P. Diddy Celebrates DJ Khaled On His Birthday With Some Kind Heartwarming Words

2020 polls: This is how to cast your vote and fold the ballot paper [Video]

Tension gets to Tuchel at crunch point in season for PSGSport —

Desist from offering party identity to people to cause violence

Maradona’s lawyer calls for investigation into his death

Free SHS and PFJ are my biggest achievements – Akufo-Addo

Why I almost had surgery to remove tribal marks – Actress

Amidu Responds To Presidency Over His Resignation

We are committed to ensuring local governance participation – Catholic Bishop

I didn't resign over non-payment of my salary – Amidu

Patently false; I didn't resign over non-payment of my salary – Amidu

Get Singapore, UK, US or Denmark to probe Agyapa – Amidu to Akufo-Addo