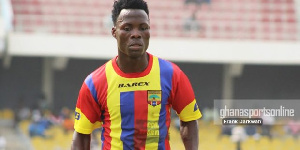 Samudeen Ibrahim has refused to rule out a potential return to the Ghana Premier League in future.

The talented midfielder who played for Hearts of Oak between 2016 to 2018 also admitted he would consider an approach from any club as long as they meet his demands.

“I am a footballer and I’m entitled to play for any club that comes for my services,” he said in an exclusive interview with FootballMadeInGhana.

Samudeen was previously linked with a move to Kumasi based King Faisal FC as well as a sensational return to Hearts last year which ultimately didn’t materialize.

He first rose to prominence when he won Division One player of the year in 2016 during his spell with King Solomon FC.

Neuer will play in a rainbow-colored armband in support of sexual minorities-victims of the Nazis
Dinamo Zagreb-federations: 14 Dynamo players brought the team silver at the 2018 World Cup, and in response, the judges kill us. You are not worried about Croatian football
Tuchel on the zeros with Wolverhampton: If we play like this, the result will come. I liked it
Nuno on the draw with Chelsea: We understood that we would not have much possession
Messi broke Barcelona's record for the number of games in the Spanish Cup
Martin Edegor: Arteta seems to me a top coach, I like his ideas
Napoli has full confidence in Gattuso. The club has released an official statement
Source https://www.ghanaweb.com/GhanaHomePage/SportsArchive/Samudeen-Ibrahim-refuses-to-rule-out-GPL-return-1120838