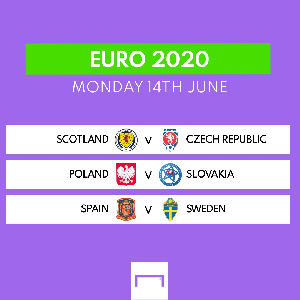 All the three sides have dicey games today

Despite featuring regularly at World Cups between 1954 and 1998, this will only be the Scots’ third appearance at a European Championships. At their previous two, in Sweden in 1992 and England in 1996, they were knocked out in the group stage.

That four teams who come third advance to the last 16 will give Steve Clarke and his side genuine belief they can make it out of Group D, also containing England, Croatia and Czech Republic. Their opening game, against Czech Republic at their Hampden Park home, could go a long way to deciding their fate.

Last November, it was a penalty shoot-out play-off victory over Serbia in Belgrade that provided probably the pinnacle of Scottish football this century, and Clarke has built a sturdy and tactically flexible team who make life difficult for their opponents.

While they do have some familiar names to Premier League fans – the likes of Andy Robertson, Kieran Tierney and Scott McTominay – Clarke has also leaned heavily on domestic players in form. The former Chelsea right-back and assistant manager isn’t afraid to change shape and selection to counter his opponents’ threats.

Scotland will host the Czechs and Croatia at Hampden Park roared on by around 12,000 supporters, many of whom will be watching their country at an international tournament for the first time.

Spain’s preparations for Euro 2020 have been hit by Covid, with both captain Sergio Busquets and Leeds defender Diego Llorente testing positive in recent days. They will miss the opening fixture against Sweden on Monday.

The remainder of the squad are currently in self-isolation, so a group of players, including our own Kepa Arrizabalaga, have been called up to take part in a parallel training group. They are staying in a separate bubble to Luis Enrique’s initial squad of 24, with the possibility of replacing any Covid-affected players. Enrique was the only boss not to use the full complement of 26 players.

Alongside these complications, there are plenty of question marks hanging over his selection as he has a squad of very impressive depth to choose from. While the current iteration of La Roja are still possession-based, they can be a bit more direct than their predecessors, using the pace of Ferran Torres and Adama Traore.

Spain were beaten by Antonio Conte's Italy in the last 16 five years ago having won the tournament for the first time in 2008, and followed that up with another triumph in 2012. Three Euro wins in four is very much possible.

Euro 2020 update is by courtesy of BetWay. Bet responsibly and not open to persons under 18 years.

FIFA and UEFA rejected the request of the Basque Country Football Federation for recognition as an independent member of organizations from Spain
Belarus will host the 2022 World Cup qualification matches at the Tsentralny Stadium in Kazan
Gerard Pique: We are waiting for Messi to sign a new contract. We want him to be with us
Shomurodov flew to Rome. Today he will undergo a medical examination for Roma
Arsenal discussed the deal for Lautaro, communicating with Inter on Bellerin. The striker is Interested in the transfer
Arsenal bought defender White from Brighton for 50 million. This is a logical increase, although the club, of course, overpaid
16 - year-old Ajax player and his brother were killed in a car accident

DopeNation, KFC And Others Storm Oswald’s School For Special “Our Day Celebration” (+VIDEO) » ™

“It is unfair companies are supporting Our Day boy Oswald, while they could equally support young Susan to become an Engineer” – Berla Mundi cries

My Wife Is Fed Up With My Chronic Cheating Habit – Shatta Wale’s Manager, Bulldog Confesses

Sarkodie talks to LootLove about Asakaa and ‘No Pressure’ album

Anyone Who Donates 100 Cedis Towards Building Of A Cathedral While There Are Schools Under Trees Is A Big F.00l

Collins Dauda, four others charged with ‘causing financial loss to the state’

Collins Dauda, 4 others charged for causing financial loss to the State

‘If I hurt anyone with my tough decisions, I’m sorry’

Accra- Cape Coast road not the deadliest Highway in Africa

Developing a country is a process not an event

Government to train 30,000 SMEs in tourism

I still don’t believe we lost that tournament

Don't give out subscribers' MoMo details to government – Court to telcos

LGBTQ+: Bill has been gazetted, first reading on August 2

Not even Asiedu Nketia as candidate can beat me

Saglemi Housing: Collins Dauda, 4 others charged for causing financial loss to the State