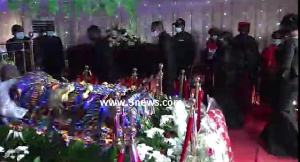 The Member of Parliament for Mfantseman Constituency, Ekow Hayford, who met his untimely death at the hands of armed robbers on his return from a campaign tour last month has been laid to rest.

Mr Kwansah Hayford was fatally attacked by armed robbers on Friday, October 9 while returning from Abeadze Dominase in his constituency.

He was shot multiple times in his stomach by the robbers, who are reported to have accused him of making the standard of living in the country difficult as part of the political class.

Police have since arrested five persons as investigations continue to find the killers.

On Saturday, November 28, President Nana Addo Dankwa Akufo-Addo led a high-level government delegation to the funeral at Mankessim in the Central Region.

Leadership of the New Patriotic Party (NPP) was also at the funeral to bid a final farewell.

Juventus have signed midfielder Marcel Ake. Contract - until 2025
Thomas Tuchel: When you go to Chelsea, you sign up for trophies. I am not afraid of this
Tuchel on Chelsea: With all due respect to Lampard, I couldn't help but jump at the chance
Arteta on the comparison of the Youngster and Messi: It is a losing battle, but Martin has the qualities Arsenal need
Johnson on Tuchel: The coach at Chelsea is the hottest place in world football. He could be sacked in six months
Ramos will not play with Levante due to injury, most likely. Today, he did not train with Real Madrid
When Griezmann passes to Messi, it's beautiful. Barcelona after 2:1 with Rayo
Source https://www.ghanaweb.com/GhanaHomePage/NewsArchive/Shot-Mfantseman-Member-of-Parliament-laid-to-rest-1120835

Why Amina and Kimathi Rawlings are trending on social media –

US Army to allow nail polish, lipstick and various hairstyles for women

Bobrisky Reacts After Lady Tattoos His Face On Her Body

Residents in Hohoe laud reduction of Ministers and PWD appointment

Rawlings is a champion of communal mobilisation

We are not afraid of Hearts of Oak - Great Olympics PRO

Invest In Personal Hygiene ,It’s The Reason Why You Loose Ladies

Police arrest pastor who said he will raise dead bodies

Hearts of Oak won’t have it easy – Gladson Awako

MoMo interoperability transactions for 2020 up by 367 percent - GhIPSS report

This is what Mahama promised Rawlings in his tribute

2927 selected as venue for Pose For Africa TV Reality Show

Twiffo Ati Morkwa MP opens up on fraud charges against him, pleads innocent

Twifo Ati Morkwa MP opens up on fraud charges against him, pleads innocent

Christianity is the most confusing religion on earth – Kofi Asamoah » ™

Why Rawlings’ ‘first daughter’ never got close to him [Audio]

I was surprised ‘unyielding’ Rawlings joined the military – Joyce Aryee

A Plus thinks Ghanaians owe Mahama; this is why

Coronavirus: Travel remains the most affected sector in service – WTO

77 attempts were made to eliminate J.J Rawlings – Former Chief of Staff recounts

I wanted to lead Rawlings to Christ