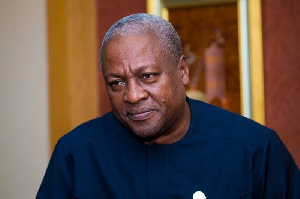 Flagbearer of the National Democratic Congress (NDC), John Dramani Mahama, has accused President Nana Akufo-Addo of crippling Ghana with huge debts and has nothing to show for the “reckless borrowing.”

Addressing residents of Bimbilla, Mr. Mahama said Akufo-Addo "has nothing to show” after superintending over the borrowing of more money in four years than the country had borrowed since independence.

He said while the country had accumulated a total debt stock of GH¢122 billion between 1957 and 2016 when he left office, President Akufo-Addo had added about GH¢154 billion to the public debt in just four years.

He said beyond the debt accumulations being high, the President and his NPP government had imposed hardship on the Ghanaian people due to their bad policies.

He challenged the Akufo-Addo government to show proof to Ghanaians of how it utilised the borrowed funds, stating that unlike his tenure which was replete with visible and verifiable infrastructure projects, President Akufo-Addo has resorted to “throwing figures around” on what he had done and deceiving Ghanaians.

Ozil will receive 3 million euros in Fenerbahce from July. Lifting - 550 thousand
Phil Neville now coaches the Beckham Club in sunny Miami. I left the England women's national team for this before the Olympics
Chelsea hope Tuchel will be at the match against Wolverhampton on Wednesday
Antonio Conte: Inter lost 0:2 in the last derby. We need to play Milan more decisively in the Cup
Pioli about the Italian Cup derby: Milan wants to win the Italian Cup, but we have a very difficult grid
PSG may offer Arsenal Draxler for Guendouzi
Sokratis moved to Olympiacos. The former Arsenal defender has a contract until 2023
Source https://www.ghanaweb.com/GhanaHomePage/politics/Show-us-what-you-ve-done-with-GH-154-billion-debt-Mahama-to-Akufo-Addo-1120742

Okraku-Mantey recounts something important his father told him

Lady Who Played Single On Twitter Busted By Her Boyfriend, Asks Her To Park Out And Bring Back His Car

Afia Schwarzenegger Mocks Mzbel As Her Plot To Kill Her Backfires

Mark Okraku-Mantey Speaks About His Relationship With Blakk Rasta

‘I Do Not Hate Buhari, I Detest His Leadership Style’ – Ezekwesili

Cecilia Marfo Has An Empty Spirit

‘Zapp Mallet Is The Best Sound Engineer In Ghana’

Meet the Ghanaian designer who made clothes for Rawlings

Rawlings’ last days were not his best; this is why

Nana Addo opposed to stay of proceedings by Petitioner

My father was a perfectionist — Zanetor

Rawlings will receive a 21 gun-salute on Wednesday — Gov't

I would have slapped the spirit out of Cecilia Marfo- Kumchacha

AFCON U-20: Coach Karim Zito to alter Black Satellites squad ahead of tournament

GRA, NIA to implement merger of ‘Ghana Card’ ID with TIN from April 1

I Couldn’t Eat After Hearing The Sad News

Laycon Excited As He Hits 900K Followers On Twitter

MTN Ghana gets approval from regulators to buy back shares

One arrested for alleged murder At Manhean

Business activities slow down at AICC due to security restrictions

Vigilante group hunt for homosexuals in parts of Accra

Referee Brobbey to officiate at 2021 U-20 AFCON