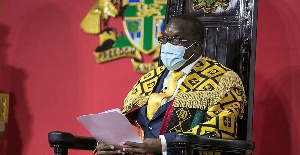 Speaker of Parliament Alban Sumana Kingsford Bagbin on Wednesday called on Members of Parliament to enhance their participation in parliamentary diplomacy.

He urged MPs to avail themselves, join parliamentary friendship associations, and take part in mutual activities that inured to the benefit of one another.

The Speaker made the call at the Parliament House when he inaugurated an 11-member Management Committee of Parliamentary Friendship Associations of the Eighth Parliament of the Fourth Republic of Ghana.

The Committee is chaired by Mr Alexander Afenyo-Markin, Deputy Majority Leader and MP for Efutu Constituency.

Speaker Bagbin urged the legislators to be interested in issues that affected one another and to collaborate among legislatures for workable solutions.

“Global integration is a sine qua non of global development,” the Speaker said and called for friendship engagements to address trans-generational and trans-territorial challenges.

The Speaker directed the Committee to co-opt three more women to join their committees, and for copies of the Code of Conduct of MPs in Ghana to be made available to all MPs.

As at the end of the Seventh Parliament of the Fourth Republic of Ghana, the Ghana’s parliament has so far registered and in friendship with the legislatures of 38 nations across the continents.

A Parliamentary Friendship Association is a cross-party association of legislators established to promote continued dialogue with Members of other Legislatures.

Once established, the associations enter into bilateral relations with their counterparts on other Legislatures.

Five or more Members of Parliament may initiate the establishment of a Parliamentary Friendship Association provided that the country with which they intend to relate is a member of the United Nations, has Legislature and has diplomatic relations with Ghana.

Manchester United buy Varan from Real Madrid for 50 million euros and bonuses. Medical examination - on Wednesday, Manchester United and Real Madrid agreed on the transfer of defender Raphael Varane, the journalist Gianluca Di Marzio informs. The deal is estimated at 50 million euros, and Real Madrid can also receive various bonuses. The Frenchman will undergo a medical examination in Manchester in two days
PSG will send Manchester United an offer for Pogba in the coming days
Cody about Prince William hugging Sak, Rashford and Sancho after the Euro final: The pain won't go away, but it definitely helped
Barcelona and Neymar have concluded an out-of-court deal and settled their differences on payments
Inter showed an away uniform with black and blue snakes
Tottenham traded Lamela to Seville for 20-year-old Gil
Griezmann agrees to a salary cut if he stays at Barca. He is ready to leave only for Atletico

Black Queens are on course for 2022 AWCON qualifiers

Barreto should bow his head in shame; he is a failure

Black Queens are on course for 2022 AWCON qualifiers - Mercy Tagoe

Barreto should bow his head in shame; he is a failure - Kotoko's Nana Kwame

Billie Eilish interview special ‘Up Close’ coming to BBC One

Communities in Deve gets Potable Water

Lack of risk management appetite is the cause of business collapse

Lack of risk management appetite, cause of business collapse – Dogbegah

How fmr Man United star, Wayne Rooney passed out in hotel while having good time with sk!mpy-dressed ladies [Details] » ™

Ghana not tackling the issue as it is – EPI

Nana Yaw Sarfoh has been abusing me – Ex-wife

I rejected a UK-based club for Asante Kotoko

5 tips to improve your s3x life

Akufo-Addo has lost control of the economy – Minority

Coronavirus: Ghana not tackling the issue as it is – EPI

I’ve stopped singing during offertory because of breasts – Brother Sammy

Burnout, anxiety, depression rising in college students ahead of fall classes amid pandemic

Elvis Manu strikes for Ludogorets in season opener in Bulgaria

Dr UN Is Not Answering My Calls, He Wants Me To Abort The Pregnancy After Denying It

“This Guy Deserves A Title In The Guinness Book Of Records”-Abena Korkor Says As She Shares Her Experience With Her New S3.x Partner [Video]

I Had A Be@utiful Dream About Moesha

Akufo-Addo has lost control of the economy – Ato Forson