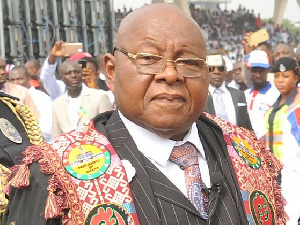 Professor Aaron Michael Oquaye, the Speaker of Parliament, has held deliberations with 21 international partners, including; ambassadors and development partners as part of the Debt Cancellation Campaign Initiative (DCCI).

DCCI is an initiative by the Conference of Speakers and Heads of African Parliament (COSAP) to advocate Africa’s debt to be forgiven due to the huge impact of the Covid-19 pandemic on Africa’s economy.

In the wake of the pandemic, the World Bank forecasts that Sub-Saharan Africa would collectively fall into recession for the first time in 25 years.

The World Bank statistically projected that between 26 and 39 million people in the region were at a high risk of falling into extreme poverty.

The Jubilee Debt Campaign report also indicated that twenty African countries now faced increased difficulties with 50 per cent of African countries spending more on debt repayments than they did on healthcare and education, which were key for human capital development.

Prof. Oquaye, speaking on behalf of Conference of Speakers and Heads of African Parliament (COSAP), at the meeting with the Diplomats and Development partners, urged them to consider cancelling debts for developing countries in Africa.

He noted that there was an urgent need for the forgiveness of debt since African countries were facing enormous challenges including, increase in health expenses and other allied expenses, shortfalls in petroleum, slowdown of foreign direct investments, reduction in trade volumes, decline in international price of crude oil, exchange rate volatility and debt service difficulties.

Prof. Oquaye said that in the light of global advocacy efforts, the establishment of a more cohesive pan-African parliamentary voice to support the global and regional campaigns for Africa’s debt cancellation had become imperative; hence, the African Speakers’ Debt Cancellation Initiative was birthed as a means to establish that cohesive pan-African parliamentary voice of the continent to support the global campaigns advocating for Africa’s debt cancellation.

Mr Tsutomu Himeno, the Japanese Ambassador to Ghana, and Chairman of Heads of Mission of Development Partners, speaking on behalf of his colleagues, said developed nations were opened to discussing debt cancellation for Africa, taking the total sum of the COVID 19 pandemic on all countries in the world.

One of the key issues that also came to the fore was the lending architecture of the world, which has changed drastically.

Mrs Stephanie Sullivan, the American Ambassador to Ghana, cited interventions offered by the Highly Indebted Poor Countries (HIPC) programme and how they cured the ills of debt burden in African countries.

She urged African countries to refer to the lessons learnt from the interventions to avoid future occurrences.

Responding to the concerns about the HIPC programme, Speaker Oquaye indicated that the support from the Programme of Action to Mitigate Social Costs Adjustments (PAMSCAD) was not enough to sustain African countries and to elevate them from dependents to real partners in the development relations.

He, therefore, urged Development Partners to embrace legislative diplomacy as a tool in engaging the continent on debt forgiveness.

Milan had rented the midfielder, Torino Meite until end of season with option to buy
Ramos played on painkillers with Athletic due to knee problems
Barcelona's presidential election is scheduled to take place on March 7
Sir Alex Ferguson: Fortunately, I was retired when I watched Liverpool play in the last two years
Well, Wayne Rooney is now a coach. It's great that we saw his career - and now we can remember everything
Neymar: There is a lot of envy and hatred in social networks. The real Neymar is known by friends, family and colleagues
Neymar: Thank God for the charisma. I have a gift to be different from the rest
Source https://www.ghanaweb.com/GhanaHomePage/business/Speaker-of-Parliament-holds-deliberations-with-international-partners-on-debt-forgiveness-1124582

Ohemaa Mercy breaks down in tears on live TV

NPP’s side constitutes the Majority in Parliament – Speaker Bagbin

‘I was elected Speaker with 138 votes’ – Bagbin

Davido apologises to fan who expressed disappointment over his recent tweet

‘Something Wicked Awards’ Comes Off Tonight

Church members to march on Pastor to demand tithes after fallout

NPP MPs in Parliament at 4am over Minority/Majority showdown

NGO calls for protection of girls amid COVID-19 pandemic

My kids may not go back to school – Okyeame Kwame

I beat Oquaye by 2 votes in speakership race - Bagbin insists

High turnout of students in schools at Oda

Donald Trump to depart Washington the morning of January 20

We are ready to accept pregnant students

NPP’s side constitutes the Majority in Parliament

Sports Obama Commends Dr Nduom For His Contribution To Ghana’s Football Development, Says He is The Biggest Contributor For The Past Ten Years In Ghana

'Spend as much as you can' - IMF head urges governments worldwide

Premier League warns players to avoid own goal over celebrations

NPP not majority, they belong to ‘majority group’ – Bagbin clarifies

We did nothing wrong - Ghana Armed Forces on La lands confrontation

Here's how schools are preparing for reopening amidst coronavirus

Talented Makeup artist creatively transforms her face into a cup

Emirates Resumes Operations To US

On guns, abortion and voting rights, Trump leaves lasting mark on US judiciary

Social media reacts to NPP MPs sleeping in Parliament after arriving at 4:am –