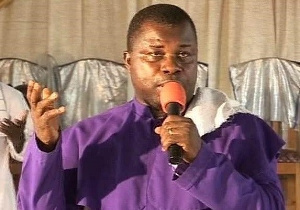 play videoLeader of the church of Rabbi, Prophet Kwabena Tewiah

The leader of the church of Rabbi, Prophet Kwabena Tewiah has decried what he says is the decision by leaders of the country to ignore the spiritual implications of some incidents and disasters that have rocked the country in the past.

According to the Prophet, disasters including recorded murder cases and the deadly June 3 disaster which left many dead have spiritual implications for which reason the leadership of the county ought to engage spiritually inclined persons to avert.

"The spirit of a person remains where he dies. That is why prior to the Circle incident I went to Chief of Ofankor asking him to fall on the Ga Mantse so they can bring his priests there to pray over what was ahead. Can you imagine that the spirit of all those who died at Circle are still at Circle? When you are going through there all you hear is wailing and shouting. The spirit that Kwame Nkrumah planted there which was protecting the nation has eroded."

"How is the nation going to progress? The spirits are there and as a leader if you want to stop it you let spiritually strong persons come in an remove the ghosts and keep them where ghosts are buried. If you don't do that the land loses its glory, the people staying around the place have it hard in everything they do," he stated.

Speaking on the recent security issues that has developed in the country including the killing of a police officer who was on an escort duty in a billion van, the prophet Prophet reiterated the need for the President to involve spiritualists in dealing with national issues.

He stated that as much as the security agencies work to handle security matters in the country, there are spiritual aspects to the issues which requires experts in the area to deal with.

‘I was a proud father and now, I have become a beggar’

Lawyer Nti Says Comedians Are Not Fools In Real Life, “We Deserve To Be Respected” » ™

‘Shielding’ elderly, ill does little to lower COVID-19 in absence of other strategies, study finds

Queen Dee Shower Praises On Afia Schwarzenegger; Says “They Don’t Know Who You Are” » ™

Tokyo 2020 Olympic Games is Victory for the world - Professor Twumasi

Cancel foreign trips, buying of vehicles for MPs and Council of State members

Yunus Musah ruled out for three weeks with injury

Conrad N. Hilton Foundation Awarded More Than $84 Million in Grants in First Half of 2021

Godfred Dame before Parliament to answer questions on unresolved murders

Kennedy Agyapong to appear before Privileges Committee from August 5