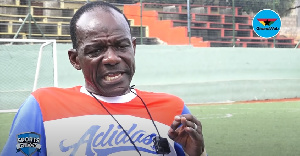 Goalkeeping is an integral department of the football set up yet not as celebrated as the striking or goal-scoring department.

In the history of the coveted Ballon d’OR, only once has a goalkeeper won the ultimate award with the Soviet Union’s Lev Yashin being the winner of that accolade.

Over time, the roles of goalkeepers have changed dramatically from mere goal-savers to sweepers and now to being the first point of attack.

These changes come with their own demands and adaptations which place extra pressure on the goalkeepers.

Damba explains the role of goalkeepers and why he believes it is the most important role in the game. His reason is that “goalkeepers have no room for mistakes.”

Damba who is now a full-time coach highlights what he believes to be the reason behind the lack of African goalkeepers at the top level of World football.

He gives special mention to Chelsea goalie Mendy for quickly adapting to the new dispensation of goalkeeping and being a good example for African goalkeepers.

In the Ghana Premier League, Damba is excited with the level of goalkeeping but also believe there is more room for improvement.

He will not disclose his top five African goalkeepers but in this riveting conversation, he reveals his goalkeeping idol.

Watch the show below

Why AfFCTA will not succeed

Why AfFCTA will not succeed - GUTA explains

Rescuers save dozens of migrants after their boat sinks off Greece