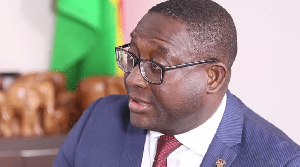 He indicated that since Mr Akufo-Addo became the president of Ghana, several measures have been put in place to tackle graft in the country.

Corruption cases that have come up, he said, have been referred to the appropriate quarters for the necessary actions and investigations to be carried out on them.

What is left, he said, is for the other state agencies in charge of dealing with the menace to also scale up their work to ensure that the problem is nipped in the bud.

Institutions including the Economic and Organized Crime Office (EOCO), the National Intelligence Bureau (NIB), the Criminal Investigations Department (CID) of the Ghana Police Service are all state institutions in charge of fighting graft.

The former lawmaker for Adenta was speaking at a press conference held at the headquarters of the NPP in Accra on Tuesday May 18.

“He has done that over the years he became president,” Mr Buaben Asamoa said.

He added “The state institutions in charge of fighting corruption to also increase their work to support the president.”

On the economy, Yaw Buaben Asamoa said, the President was able to build the economy to the admiration of the International Monetary Fund (IMF).

The buoyant economy enabled the country to withstand the effect of the pandemic, he added.

Man City could buy Pau Torres if they sell Laporte
Inter is ready to sell Lautaro for 90 million euros
Verratti could be part of Italy's bid to face Switzerland
Trippier on the England team: As a team, we are not afraid of anyone
Barcelona will not announce the signing of a new contract with Messi while the striker plays at the Copa America
Hames accused the coaching staff of Colombia of disrespect after being excluded from the squad for the Copa America
FA on England players taking a knee: This is a protest against discrimination, injustice and inequality

No bail yet for caregiver held over baby’s death