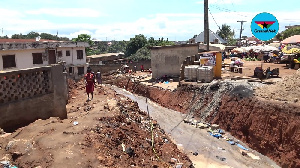 play videoThe drainage under construction at the Suame market in Kumasi

Some traders and residents living close to the Suame market have been left to count their losses after a drainage gutter under construction in the area was abandoned for about two weeks pending completion.

The market women fumed that the gutter had separated them from the rest of their fellows and by extension, customers since there is no well-constructed bridge linking them.

Sharing their grievances with GhanaWeb, the traders who sell various foodstuffs to finance their homes explained that since the beginning of the construction of the drainage sales had dipped since the customers do not get to their side of the market.

They also lamented that about their safety in the evenings since they have been forced to use other routes to the market, routes they describe as unsafe due to the exposure to robbers.

A woman whose house had been affected by the construction lamented that members of her household had become sitting ducks for thieves. She intimated that some persons who pass in front of their house steal their belongings which have been exposed due to the breakage of the wall.

She also observed that work had been stalled by the workers because there were no building resources and materials to continue the project. She entreated member of parliament for the Suame Constituency, Osei Kyei-Mensah-Bonsu to intervene to facilitate the project’s completion.

Another aggrieved trader who was displeased with the effect of the drainage construction threatened to not vote in the upcoming elections if the work was not facilitated to completion.

Several projects are being undertaken in parts of the country as Ghana nears election of presidential and parliamentary candidates into office.

Barcelona are working on extending their contract with Fati. Mendes wants the player got a raise
Hames will miss the Premier League match with Southampton
Goetze scored two goals in his first two games for PSV
Real Madrid are paying the price for a stupid sale to Ronaldo. No one to score. Calderon on the club's problems
Ozil posted a GIF of himself at work in the office: Forward, Arsenal
The Slovenian youth team wants to expel the tyrant coach: he is Against warm-UPS, forbids sleeping on planes and celebrating goals
Ozil on the rapid match: I'll support Arsenal at the TV. I bet on a 4-1 win
Source https://www.ghanaweb.com/GhanaHomePage/NewsArchive/Suame-market-women-fume-over-abandoned-gutter-under-construction-in-Kumasi-1063078

Seven communities in Adansi North to get electricity

Ethiopia to jail citizens who refuse to wear masks

NDC MPs threaten to sue Audit Service Board over Domelovo

Paul McCartney records album while ‘messing around’ during lockdown

Mohammed Kudus sidelined till next year due to a meniscus injury

Check out some 1D1F businesses so far

‘We All Have Mothers’, Tiwa Savage Replies Beyonce’s Mum Over #EndSARS

We have performed better, let’s give Akufo-Addo another term to move Ghana forward – Sammy Awuku

The insults are too much - Fritz Baffour to politicians

#EndSARS: Ghana is sitting on a time bomb - Sammy Gyamfi

I want a funny boyfriend

NDC members invoke curses over murder allegations against their PC

Davido Hits The Gym To Reduce His Belly Fat (Video)

'I have voted once, it was for NPP’s Agyekum Kufuor' - Nigel Gaisie

Actress Ada Ameh Breaks Down In Tears; Begs Government To Allow Her Bury Her Daughter (Video)

I will stop campaigning for Akufo-Addo if ……

Bui gets centre to provide science, technology and robotic education

Oti has no hand in the secessionist uprising – Nana Asiakwa

Mahama wades into happenings in Nigeria

US, Russian trio return to Earth after six months on International Space Station

What are the best bookmakers for Nigeria residents?