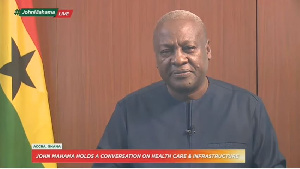 Former President John Dramani Mahama has lamented how he was given a raw deal by sections of the Ghanaian media over claims he had cash stashed in an offshore account.

He disclosed such an account never existed as was portrayed by the media who have suddenly gone mute on the ills of the current administration adding that in his entire life, he has just three bank accounts.

According to him, claims that he has an offshore account where he stashes cash stolen during his tenure in government are lies.

He observed that they were ploys by the governing New Patriotic Party (NPP) to discredit him and the media gave it the needed oxygen that made people believe in him.

“I don’t have any foreign account anywhere, I have three bank accounts – ADB, Zenith, and Guaranty Trust bank. If you want to investigate me, investigate those banks, my money is all there.”

He said claims that he had stolen 100 million dollars and stashed it In some foreign bank accounts were lies to make him unpopular.

“They said Lordina and I have stolen 100 million dollars into a Swiss Account. How would you get access to that kind of money? World Bank money doesn’t come to Finance Ministry. It’s with the BoG, how do I go to them to ask for such money and transfer it to a Swiss account?”

To John Dramani Mahama, the media hasn’t been fair to him considering the fact that although the current government has erred in several ways, their “sins” have been shelved when a lot of noise was made during his tenure.

“You made so much noise, and now you’ve all gone quiet. You’ve all been cowed, you can’t talk. There were all kinds of propaganda against me.”

Prior to the election 2016, there were several stories about the wealth amassed by former President John Dramani Mahama.

There were claims that he had invested in Real Estate in Dubai and had an account in a Swiss bank where all the stolen cash was been sent to.

There were also claims that John Dramani Mahama had built a house and stashed the house with money including the polytanks in the house.