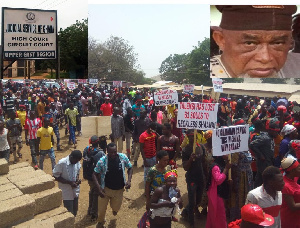 A judgment entered Friday in a defamation case at a circuit court in Bolgatanga against some natives of Talensi, a district in the Upper East Region, is heading for an appeals court.

They look determined and unworried in the face of the judgment. They insist strongly that they did no wrong in the course of executing their duty as citizens to protect the public interest.

The five men are members of the Concerned Citizens of Talensi (CCT). The CCT has been involved in a long struggle against some human-rights abuses and violations that have sustained Talensi in the headlines since the arrival of the Shaanxi Mining Company Limited (a wealthy Chinese mining firm) in the mineral-rich-but-deprived district in 2008.

Families, including members of the CCT, have lost relations as a result of the abuses and violations. The roads in the district are in states of disrepair. Inhabitants of the district’s mining hub, Gbane, struggle to find clean water to drink― with women and children often seen, particularly in the dry season, scooping littered sand from dry riverbeds in search of water.

The presiding judge, Malcolm Bedzrah, directed the CCT members to pay Gh¢40,000 in damages to the plaintiff― the Paramount Chief of Talensi, Tongraan Kugbilsong Nanlebegtang, who claimed a statement made by the civil rights activists defamed him. The judge also ordered them to retract the said statement with an apology.

At present, the chief is also in different courts against some other natives of the region over related claims. Some local and foreign observers have shared their opinions about the multiple litigations, describing the “unprecedented” trend as “a suing spree” and “a growing threat to free speech” in the area. He has never attended any of the court sessions in person; he is being represented in all of the cases all the time by his Secretary, Richard Yinbil Sunday, by the Power of Attorney (a written authorisation to represent someone in a business or legal matter).

Some international bodies and prominent media houses overseas, following Friday’s judgment, have offered to back the social justice promoters in moral and legal terms as they seek a review of the judgment at an appellate court. It is the first time the outcome of a civil lawsuit is drawing such attention to the region. The already-existing local support for the CCT members has seen a further boost since Friday from more traditional authorities and youths who believe the activists are standing for a cause that is humanitarian and just.

The Root of the Court Case

The court case between the paramount chief and the CCT members is rooted in an investigation that led to the resignation of a Minister of State at the Presidency, Rockson Ayine Bukari, in 2019.

Some officials of the Shaanxi Mining Company Limited (now known as Earl International Group) were caught having secret meetings with a senior High Court judge, Justice Jacob Bawine Boon, in 2018 during an EIB Network investigation on the judicial system. The Chinese company was involved in a civil case before Justice Boon against the Cassius Mining Company (a multinational establishment of Australian origin) at the time. The meetings were held on separate days (late in November and early in December, 2018) at the judge’s residence in the Upper East regional capital, Bolgatanga.

Inhabitants of the mining hub struggle to find clean water to drink The Minister of State at the Presidency (Rockson Bukari) sought to kill the investigative story by giving Gh¢5,000 in bribe to the investigator (Edward Adeti) and begged him to not expose the High Court judge and the Chinese company. A brand new motorbike was also presented to the investigator to influence him to hide the findings from the public.

An investigative tape has the Minister of State saying he (the minister) took the cash from the Chinese company’s CEO. He is also heard on another investigative tape saying: “… the Shaanxi people, the Tongo Rana (the Paramount Chief of Talensi) and myself, we’ve supported them all along… the Cassius people are not reliable…the Tongo Rana said I should try to tell you (Edward Adeti) not to do it (publish the story) because it would affect them (Justice Boon and the Shaanxi Mining Company Ltd)…”

The story was published and the items given in bribes were sent to state security services― the National Intelligence Bureau (known as the Bureau of National Investigations at the time) and the Ghana Police Service― as evidence. Later, the investigative tapes were released and heard in many public places. Justice Boon was disqualified from sitting on the ‘Cassius versus Shaanxi’ case and subsequently was transferred from the region to a remote area in the country, losing his position as the Upper East Regional Supervising High Court Judge. Rockson Bukari resigned his position as a Minister of State at the Presidency for his evident involvement in the bribery scandal.

Ghana’s President, Nana Addo Dankwa Akufo-Addo, accepted the resignation letter but the Republic did not prosecute the minister despite calls for him and those he cited on the tapes to be investigated and prosecuted. The Republic prosecuted only three private individuals who were involved or cited in the bribery scandal at the Circuit Court in Bolgatanga. The three individuals― Maxwell Wooma, Charles Taleog Ndanbon and Suwaid Abdul-Mumin― were acquitted and discharged on the basis that the three accused persons and the witness in that Republic trial (Edward Adeti) were not public servants (which the excluded Minister of State and the other big names he mentioned on the tapes were).

The CCT members, who had been opining publicly that Shaanxi had been violating human rights with impunity in the area because it was enjoying support from powerful figures at several levels, asked that the Paramount Chief also resign his position as a member of the Council of State and Board Chairman of the Tema Oil Refinery (TOR) just as the Minister of State at the Presidency (who cited his name on the undercover tape as a collaborator) had resigned and should subject himself to further investigations. The CCT members’ demand simply was based on the revelations made on the investigative tape by the resigned Minister of State.

In response to the demand, the Paramount Chief filed a defamation suit against five persons amongst the CCT members. Many have asked to this day why he by-passed the former Minister of State at the Presidency, who is the “primary producer” of the allegations, but chose to target the “secondary consumer” in his legal action, why he opted to fight the “effect” but decided to ignore the “cause”, why he sidestepped the “one who said it” but went after the “one who only heard it”.

Hearts of Oak to get modern commercial centre

'I know you will succeed' - Wakaso after Akonnor’s sack

IT specialist suggests use of smart technologies to prevent illegal-mining

GFA, Sports Ministry to discuss salary with Rajevac before agreement

ECOWAS needs deep introspection if it wants to curb coups

'Do or die' vs 'all die be die': Mahama giving the same excuses Akufo-Addo gave

Former Kotoko goalkeeper Felix Annan could be heading to Medeama

Like incompetent Akonnor, Akufo-Addo and NPP will be sacked in 2024

Like incompetent Akonnor, Akufo-Addo and NPP will be sacked in 2024 - NDC man

Nautyca teams up with Shatta Michy on new single, ‘OK’

WAEC yet to set date for leaked WASSCE papers

You’re our ‘spiritual father’ but the laws must work

NDC flagbearership is not a personal property

NDC flagbearership is not a personal property - Yaw Boateng Gyan

Harruna Attah celebrates 69th birthday with 'do or die' T-shirt

Teenage pregnancy, cause of unemployment

Should Someone Who Has Worked His Whole Life As An Actor Be Feeding Off Donations ? Fix The System

Teenage pregnancy, cause of unemployment-NPC

Labourer remanded into custody for robbery

Tailor gets 10 years imprisonment over fraud