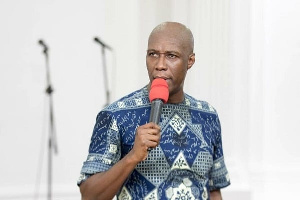 Lead Pastor of Alabaster International Ministries, Prophet Dr. Kofi Oduro, who is also the host of “Tiee” on Okay FM has praised the Managing Director and General Manager of Despite Media, Dr Fada Dickson and Kennedy Asante Osei for the opportunity to freely operate on radio without any interference.

The man of God in an interview with Abeiku Santana in April 2021, noted that despite being a “controversial man”, he has never on any occasion been silenced by his bosses as in the case of some media stations in the country.

Prophet Oduro speaking in the interview monitored by GhanaWeb stated: “I want to use this opportunity to say a huge God bless you to my Managing Director and General Manager, Dr Fada Dickson and Mr Kennedy Asante Osei. In all my controversial whatever, they love me as I am.”

According to the Prophet who has on several occasion been criticized by some persons for being outspoken, he is not moved by what people say about him.

The preacher man further noted that he will continue to speak the truth thus the undiluted word of God without fear.

He said: “I have never received a threat on my life, never on my phone or verbally. I believe that God protects those that He has called. If truly God sent you to deliver His word, then press on. He is your strength."

“I will never react because the focus is more important to me. Keep doing what the Lord has called you to do,” he added.

In a time that has been described as a culture of silence, some media personalities have been attacked for criticizing persons in high position. In May this year, popular radio presenter Captain Smart, who works with Angel FM was suspended by the owner of Angel Broadcasting Network, Dr Kweku Oteng over his comment against the ruling government.

Verratti could be part of Italy's bid to face Switzerland
Trippier on the England team: As a team, we are not afraid of anyone
Barcelona will not announce the signing of a new contract with Messi while the striker plays at the Copa America
Hames accused the coaching staff of Colombia of disrespect after being excluded from the squad for the Copa America
FA on England players taking a knee: This is a protest against discrimination, injustice and inequality
Inter doctor: Eriksen had no problems with us or at Tottenham. In Italy, this is controlled very strictly
Cancelo has tested positive for coronavirus, Dalot will replace him in the Portuguese national team