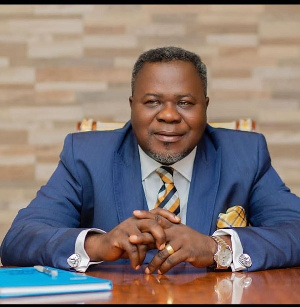 Dr. Kwaku Oteng is the owner of the Angel Group of Companies, owners of Angel FM

Captain Smart may have been suspended by his employers at the Angel Broadcasting Network, owners of Angel FM, but he appears to remain a hero to many. Of course, there remain many who may still hold a lot against the man, arguably so.

In his conversation with the host of Good Evening Ghana on Metro TV, Paul Adom-Otchere, Captain Smart detailed the circumstances that led to his boss asking him to take a back seat for a while (30 days).

Captain Smart disclosed in that interview that he was informed of his suspension by the owner of ABN with the reason that he (the owner of ABN) was under pressure from the Ghana Revenue Authority and other state institutions.

Smart revealed that prior to that, he had gotten wind of how certain persons had met at the Labone Coffee Shop, a popular spot for influence peddling through the media, and planned his suspension from ABN.

“I told him that the night before yesterday [Wednesday], I have had [...] information that some people have met at the [Labone] Coffee Shop to plan what should happen,” Smart told the host of Good Evening Ghana on Thursday, May 6.

He went on, “so yesterday [Wednesday] on air, I said that look if today, Kwaku Oteng says Captain I cannot work with you again, praise God. I will leave. I won’t be hungry because I’m not a lazy person; my brain works.

So, I called Dr Kwaku Oteng and he said some people within [....] Akufo-Addo’s government are calling him and have been writing him letters from Ghana Revenue Authority (GRA) just because they say I talk too much.

“So, I told him that sir, I can say all sorts of things in this world but to go to that extent to say that the President of the land, the Vice, the IGP and Alan Kyerematen are fools, no! if you can provide me with the evidence, I will apologize to the world and resign from your company.

"In the course of the conversation, he told me that because of the pressure, when I close from work today [Thursday, May 6] he would want me to go off air for some time and when the pressure from above comes down, then I can resume. So, I said OK, if that was going to help you, [fine]. Because I am just one individual and you have all these companies, if Captain Smart alone will bring your company down, why not, I will do that [step aside] for you,” he explained.

But these are the biggest concerns; what has the GRA got to do with matters of anybody, specifically a journalist, alleged to be making the government unpopular? What interests does the GRA directly have in such a completely unrelated field? Or, is it a case of the GRA having some dirt on the Angel Broadcasting Network with regards tax payment and for which reason it is able to exact such influence on its management to push one of its foremost voices on air into the background?

Or perhaps, the primary mandate of the GRA has changed and we are yet to get the memo.

Fiorentina has agreed a contract with the coach of La Spezia Italiano
Marchisio said that all the players of the Italian national team should have taken a knee. He later added that there should be freedom of choice
England will do their hair like Foden if they win the Euro
Manchester United are ready to trade Pogba for Varane. Real Madrid want to sell the defender to sign Mbappe or Holand
The participation of Muller and Hummels in the match against Hungary is questionable due to knee injuries
Neuer will wear an LGBT armband for the match against Hungary
Chalhanoglu will sign a 3-year contract with Inter with a salary of 5 million euros. Medical check-up-tomorrow

‘I have not taken any decision yet’

The biggest tech challenge of fighting ransomware: A battle of milliseconds

Israel’s new PM vows to toughen up approaches against Hamas

FLASHBACK: The British degraded Ghana’s monarchy after calling it a ‘stool’

The other side of Abu Jinapor [Photos]

Organisers to allow alcohol inside Athletes’ Village but no condom distribution

Sarkodie And Stonebwoy Fans Cla.sh Over Who Is Copying Who On Twitter

Tokyo 2020: Organisers to allow alcohol inside Athletes’ Village but no condom distribution

four benefits of yoga for well-being

What you need to know about fibre deployments