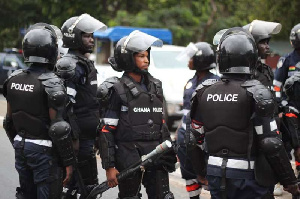 Some police officers gathered during an operation

Retired Police Inspector, Inspector Stephen Sarfo Amoah (Rtd), has disclosed that there are some police officers who wish to voluntarily retire from the service before the stipulated age but are unable to do so due to issues with pension payment.

Stephen Sarfo Amoah shared that these police officers deal with a lot of issues including fatigue and that informs their decision to voluntary retire before the age of 65 years.

Sharing his own experience, the retired police inspector stated that he voluntarily retired at age 46 due to some issues in the service. However, the Service has refused to pay him what is due him for retirement.

He notes that efforts to seek an explanation on the issue have proven futile. He however shares that he continues to pursue the case to allow officers who wish to voluntarily retire to do so with what is due them after retirement.

He made this known in an interview with Samuel Eshun on the Happy Morning Show when he stated: “A lot of officers in the Ghana Police Service will like to retire voluntarily due to certain issues. I know senior officers who are tired but because of what the controllers are doing with regards to the pension payment, they can’t go. As I speak to you, the police administration does not have any document from the controller that states that henceforth, because of certain issues or the law, any officer who goes on voluntary retirement will not receive any pension payment. There is no document like that.

I am not fighting for myself only but I am fighting for officers in uniform because they cannot come out openly to fight this cause when they are in uniform”.

Inspector Stephen Sarfo Amoah (Rtd) said after he voluntarily retired at age 46, he has only received gratuities from the government and no pension pay. He has written several letters to the IGP and the Controller and Accountant-General’s department seeking clarification as to why he has not received his pension pay since his retirement but he has not received any feedback.

The retired inspector hints that he wishes to pursue the case in court as he believes he has been unfairly treated.

Southgate on Phillips: Gives a slim midfield and allows you to play effectively in the attack of the four
Christian Eriksen: I won't give up. I want to understand what happened to me
Zinchenko about 2:3 with the Netherlands: It hurts to miss in the last minutes, but this is football
Dumfries about 3:2 with Ukraine: The most beautiful goal of my career, but not my best game
I saw the best Euro match with my own eyes. Ukraine respect for the character, the Netherlands-for the power and class
My mother didn't eat in the evenings because she left everything to us. New England star Calvin Phillips
Wijnaldum celebrated a goal for Ukraine in the style of van Dijk. He has already done so-constantly supports a friend

Green Ghana Project: Bring back Oda to its glory - MP

Your service to God won’t be in vain — Bishop

Coronavirus: How Ghana was able to stave off a third wave – Dr Okoe-Boye