There’s no Voltarian, Ashanti, ‘Dombo’ or 'Busia' person on Agyapa Royalties board – Amidu 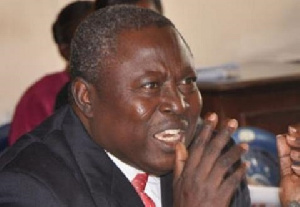 Former Special Prosecutor, Martin Amidu, among his list of assertions in his latest epistle, says the absence of representatives from some sections of the country on the board overseeing the controversial Agyapa Royalties transaction, is enough proof for him, there was a ‘hidden’ agenda behind the deal.

According to him, his investigations revealed that there were no persons from the Ashanti and Volta regions, neither were there any representatives from the National House of Chiefs.

He also accused President Akufo-Addo and the Finance Ministry of being the masterminds behind the stinking deal to favour only a few in government.

The former Special Prosecutor highlighted that “Throughout the painstaking examination, analysis and anti-corruption assessment of the Agyapa Royalties Transaction Documents in my capacity as the Special Prosecutor, I could not find “a Dombo”, “a Busia” or “the Golden Stool of the Ashanti Kingdom”, or anybody from the Volta Region from the New Patriotic Party on the Minerals Income Investment Board, the offshore incorporated Agyapa Royalties Limited and its wholly-owned subsidiary ARG Royalties Ghana Limited, not to talk of other non-partisan and partisan Ghanaians or the National House of Chiefs as custodians of our lands and beneficiaries of the gold royalties of Ghana."

“I can now say as a citizen of Ghana on the basis of the Agyapa Royalties Limited Transaction report that the transaction was suspiciously conceived by the Ministry of Finance and the Presidency and implemented to serve only a few persons within even the New Patriotic Party".

“The 1992 Constitution mandates every citizen of Ghana to defend the national patrimony of its extractive resources particularly when the Constitutional trustee personified by the President of Ghana, for the time being, seeks to deprive the Chiefs and people who are the beneficiaries from having any say in the management of such an important national extractive resource patrimony,’ he further added.

Tuchel devoted a lot of time to tactics and talked to all the Chelsea players at the first training session
Ibrahimovic after clash with Lukaku: In the world of Zlatan, there is no place for racism
Milan defender Musacchio has passed a medical in Lazio
Arsenal is a big club in England. Ødegård fit into the role of the tens of Arteta. Holand on Martin
Klopp on Lampard's resignation: Abramovich is not the most patient man in the world. It is cruel to make this decision so early
Berbatov on Suarez: Barcelona showed disrespect and pays for it. Luis must be dying of laughter
In the environment of Messi deny that the player and his family members learn French
Source https://www.ghanaweb.com/GhanaHomePage/NewsArchive/There-s-no-Voltarian-Ashanti-Dombo-or-Busia-person-on-Agyapa-Royalties-board-Amidu-1120763