They have eyes but they can’t see - Wontumi quotes Mark 4:11 to mock NDC 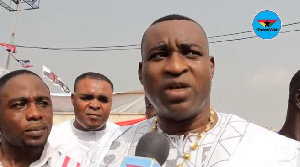 Wontumi who revealed his depth of knowledge in the bible quoted Mark 4:11 to thwart the hypocrisy of the opposition NDC for not acknowledging the works of President Nana Addo Dankwa Akufo-Addo.

According to him, although the NDC was given the mandate to rule the country, they could not uncover the mysteries to successfully rule the country hence they run to the IMF for a bailout and were unable to roll out the Free SHS.

The politician also quoted 1 Peter 3 vs 12 to indicate that “God’s eyes are on Akufo-Addo and anytime he prays he hears.”

“But the Lord has turned his face against those who do evil and that is Mahama,” the Ashanti Region NPP Chairman unapologetically said.

Despite attempts by the show host, Adom-Otchere, for Wontumi to apologize for naming the former president as evil, the politician declined to do so.

The NPP Ashanti Regional Chairman went ahead to say Mr Mahama’s verbal fumble to describe Akufo-Addo’s 1st term in office as eight years is a prophecy from the Creator.

Liverpool will buy Jota for 41 million pounds. Wolverhampton will pay up to 13.5 million for Hoover
8 is Bavaria's favorite number. Now she beat Schalke: Gnabry scored a hat-trick, Sane scored 1+2, Lewandowski came up with an assist by rabona
Liverpool agreed a 5-year contract with Jota. The transfer amount could be 43 million euros
I left everything and went to the other side of the world for my favorite team. The heartwarming story of a Norwegian fan in love with Santos
Lewandowski scored in the 1st round of the Bundesliga in 7 seasons and repeated the championship record
Gnabry scored a hat-trick against Schalke
Lewandowski scored for Schalke in their 10th Bundesliga game in a row. This is a League record
Source https://www.ghanaweb.com/GhanaHomePage/NewsArchive/They-have-eyes-but-they-can-t-see-Wontumi-quotes-Mark-4-11-to-mock-NDC-1033423

Ghanaian kills Ghanaian in US (Photos)

Shut Up If You Don’t Know Anything About Gospel !!

Conte’s Inter on a ‘mission’ to kill off Juventus dominationSport —

Accept His Proposal If You Like Him And Stop Stretching Things

Full list: Ghana’s new voter population in all constituencies from highest to lowest

‘You Will Not Die If You Love Wizkid, Davido And Burna Boy’ : Erigga

‘I’ve Been Having Goosebumps From My New Sounds’, Johnny Drille Says

You are beautiful- Fans drool over Michy’s new look

Is Efia Odo Jealous That Someone Might Snatch Kwesi Arthur? See Her Reaction After She Saw A Lady Getting Closer To Him

#BBNaija: Why I want Laycon, Dorathy out of Lockdown house – Nengi

I will deal with you spiritually- Adu Safowaa warns Stacy Amoateng

I Abandoned My Family Just To Campaign For NPP And I Gained Nothing, Never Again Will I Do That

Ghanaian Kills Colleague In US

Patience Ozokwor receives car as birthday gift from her children

Odweanoma Paragliding site to be commissioned during ‘Yenko Kwahu’ Festival

IDEG to host discussions on De-monetizing politics in Ghana

I Have A Song Specially Made For Sarkodie