Captain Planet of 4×4 notoriety has told his fellow artistes to look out for themselves since no one else does.

Captain claims that the public cares for artistes only when they are in power. Once you’ve lost all value to society, you’ll find yourself in the trash.

He advised that they these reigning artistes act smart as long as they are on top of the game else they will live to regret once they are no longer producing hits or relevant in the game.

‘To my fellow Musicians Know This & Know Peace: Nobody Cares What Happens To You Next In This Industry. THEY’RE LOVING YOU BECAUSE YOU ARE REIGNING. THEY WILL TRASH YOU WHEN YOU ARE NO MORE BENEFICIAL TO THEM. OUR FAIL IS THEIR GAIN. TAKE CARE OF YOURSELF.’

The guy called Sylvanus Dodji Jeoffrey, also known as Captain Planet, is a co-creator of the 44 Group.

In the year 2000, 4×4 became a thing. They are one of the greatest hip-hop groups Ghana has ever produced. Members include Captain Planet, Coded, and Fresh Prince.

Songs like “Waist and Power,” “Mokoni,” “Yesi Yesii,” and “many more” are just a few of the group’s numerous hits.

As a trio, the 3 artistes have been to several prestigious venues.

In an interview with Daybreak Hitz on Hitz FM, group leader Captain Planet announced that the band was disbanding in 2018.

He said that the team’s lack of motivation was forcing everyone to go off on their own. 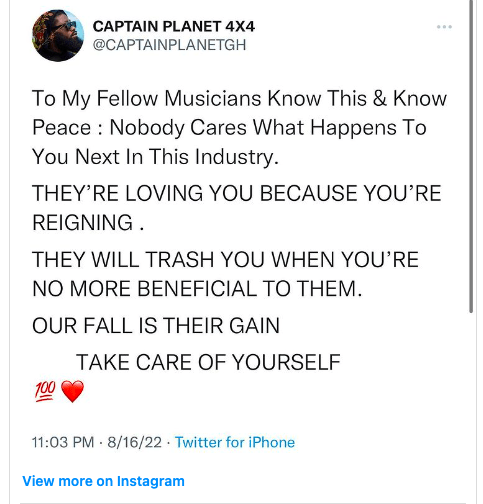