The Battor Traditional Area, which is in the North Tongu constituency, has detooled Thomas Amadri, the erstwhile paramount chief of the traditional area. He is now to use Thomas Amadri instead of Patamia Djekle as his stool name.

Stressing that, the defunct paramount chief brought discord and conflict to the five clans. He added that, since he was enstool as the paramount chief, the community has lacked development and the youths have no jobs of their own.

To this effect, Thomas Amadri has been warned to stop parading himself as the paramount chief of the Battor Traditional Area.

Torgbe Korsi later apologized to the youths for Thomas Amadri’s incompetence and for dividing the various clans.

He urged the youths to trust in the chieftaincy unit to bring a competent, hardworking, and humble person as the new paramount chief.

Torgbe Korsi appealed to the youths to have confidence in the leaders and to be patient with the leaders of the Battor Traditional Council.

Some youths in Battor who expressed their concerns stated that the conduct and attitude of Thomas Amadri was in direct breach of the oath he swore to the people of Battor Traditional Area.

Emphasizing that, his detoolment will go a long way toward restoring unity and development to the Battor Traditional Area. 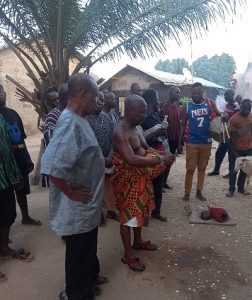 Despite buys 3 brand new Escalades to mark his 61st birthday

The Catholic pilgrims who walked 9 days to see Pope Francis

‘I pray our Dms never leak’

Duncs Consult to hold ‘The Customer Experience Scale Up Seminar 2023’ on Feb. 11

Is Your Income Tax Serving The Right Purpose?

“How my wife abandoned me in the hospital and fights me when I don’t give her money” Mr Ibu tells his side of the story, as he moves out of his house (Video)

“He is suffering from dementia” Mr Ibu’s wife cries out for help as she clashes with his alleged daughter, Jasmine over his Abuja property and more (videos)

How A Patient Told A Doctor That; ‘I Am Finished’ After He Discovered What Killed 2 Patients-Olukoya

The Spec, Price of Samsung Galaxy S23 Series Out

Acting Vodafone CEO Concerned About Its Performance in Europe

Teacher confesses to having sex in classroom with 12-year-old, police say

Things We Do That Weaken The Body

Feb. 7 scheduled for Round of 16 draw

KUSAUG chiefs call for restoration of peace in Bawku

OpenAI and its “ChatGPT”– Things to know about the revolutionary Chatbot

Ghanaians are witches; they’re doing everything possible to bring Sarkodie down – Osofo Kyiriabosom

‘Only hungry and broke Ghanaians are talking about my divorce; I will curse them all’ – Osofo Kyiriabosom fumes

Elon Musk Found Not Guilty Of Fraud Over Tesla Tweet |

May Edochie files lawsuit against actress, Sarah Martins for plotting with Judy Austin to smear her reputation, exposes their ploy

GAF’s use of force in Bawku unfortunate; likely to escalate conflict

10 persons arrested for engaging in galamsey in Atewa Forest Reserve

Actress Omotola Jalade Celebrates As She Bags Appointment With OSCARS

Reactions as UCL shares throwback photo of Messi laying behind PSG wall to defend a freekick.