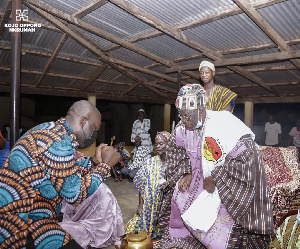 The Paramount Chief of the Tolon Traditional Area, Major (Retired) Sulemana Abubakari has honoured the Minister for Information, Kojo Oppong Nkrumah at the Tolon-Naa's Palace for his devotion to serving the country.

Mr Oppong Nkrumah was in the northern part of the country as part of a three-day working tour of state-owned media houses in the five Northern Regions to acquaint himself with the challenges journalists face in their day-to-day operations.

His tour also took him to Tolon where he visited the Tolon-Naa's palace to pay homage to the Paramount Chief.

The Tolon-Naa, in his remarks, praised Mr Oppong Nkrumah for dedicating his life in service to his country and his resolve to doing more to advance information dissemination in the country.

On his part, Mr Oppong Nkrumah thanked the Paramount Chief for the recognition and promised to do more to advance the corridors of information in the country.

The Information Minister in his address to journalists in the five regions challenged them to project the economic potential within their regions. He said journalists should develop a conscious culture beyond holding duty bearers accountable to portraying local economic opportunities in their regions in a way that will attract investors to harness these potential and most importantly create jobs for the local people.

“The media constitutes the fourth estate of the realm and this raises the question of what is the responsibility of the media in the national development exercise. One of them is to hold duty barriers accountable, another includes drawing the society's attention to key issues that must be attended to but I think you also have to promote opportunities in your various communities.

“There are many communities with lots of potentials and while we are not pleased with the level of economic development in those areas, we in the media space need to do more in projecting the numerous opportunities in our local areas,” he said.

This he said provides a support mechanism for journalists and provides the NMC with the needed platform to interface with journalists who come under physical attacks by investigating, validating and taking the necessary steps to seek legal action.

Gareth Southgate: We shouldn't be football snobs. In matches with top teams, diversity is important
Leonid Slutsky: I am still sure that the Finnish national team is the outsider of our group. They were very lucky against Denmark
I'm not a racist! Arnautovic apologized for insulting the players of the national team of North Macedonia
Gary Lineker: Mbappe is a world-class star, he will replace Ronaldo, but not Messi. Leo does things that others are not capable of
The Spanish fan has been going to the matches of the national team since 1979. He came to the Euro with the famous drum (he could have lost it during the lockdown)
Ronaldo removed the sponsored Coca-Cola at a press conference. Cristiano is strongly against sugar - does not even advertise it
Sweden forward Isak: I would like to have a little more possession. But we are happy with the point

NDC has no reason to worship Mahama - Moshake

Child labour in Ghana is influenced by poverty - Kusi-Boafo

Kin Dee Teams Up With Kofi Kinaata On New Song, Set To Be Released In July

Minority Leader faults Akufo-Addo for rise in shootings in Ghana

Our relocation not immediate, maybe in 5 years

We are praying for Henry Quartey to succeed

Akwaboah hints of a release date for ‘Lighthouse’

Govt to rake in informal sector tax with new programme

We did not boycott Adjei Mensah Korsah’s vetting

Census is our biblical duty – Clergyman

Mankind has committed atrocities against the environment and are all sinners

Old comedy skit of Twene Jonas pops up, shows when he was hustling in Ghana before he moved to the US (+VIDEO) » ™

My wife cannot treat me like my mother does, she can never be my mother – Counsellor Lutterodt

KGL does not owe us – NLA rubbishes allegation by LMCs

Planting of trees: Committee proposed GH¢125m but we used less than GH¢1m