UG polls unscientific, insensitive to the feelings of those burdened by Akufo-Addo’s policies – PI 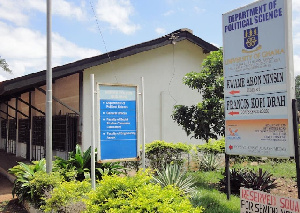 The Progressive Intellectuals (PI) Network of Ghana is questioning the credibility of an opinion poll conducted by some lecturers in the Political Science Department, University of Ghana.

The survey said President Nana Akufo-Addo will win the December 7 election with 51.7 per cent while his main contender, John Mahama of the opposition National Democratic Congress (NDC), will come second with 40.4%.

Reacting to the polls, the Progressive Intellectuals said they have observed that since opinion polls started emerging in the name of the Department of Political Science, the results have always been favourable to the New Patriotic Party (NPP) irrespective of whether the party was in power or opposition.

“It has never been the case that the Department of Political Science conducted an opinion poll and made adverse findings against the NPP, and never have their research made any findings favourable to the National Democratic Congress (NDC),” PI said in a statement signed by the group’s president Professor Stephen Kendie.

To this end, PI said the outcome of this poll raises questions about the integrity of the faculty and “cast a very bad image on an otherwise important Department within the University of Ghana.”

RE: DEPARTMENT OF POLITICAL SCIENCE, UNIVERSITY OF GHANA OPINION POLL

The Progressive Intellectuals (PI) network of Ghana has observed with dismay and regret attempts by some lecturers in the Political Science Department, University of Ghana to use public opinion polling as a surrogate campaign strategy in the hope to swaying voter preferences in the December 2020 elections. While opinion polls are established practices of every democratic system of governance, we are particularly concerned about the deliberate abuse of polling for partisan purposes. We have observed that since opinion polls started emerging in the name of the Department of Political Science, the results have always been favourable to the New Patriotic Party (NPP) irrespective of whether the party was in power or opposition. It has never been the case that the Department of Political Science conducted an opinion poll and made adverse findings against the NPP, and never have their research made any findings favourable to the National Democratic Congress (NDC).

These observations raise questions about the integrity of the faculty involved in such opinion poll research and cast very bad image on an otherwise important Department within the University of Ghana. In particular, the trend of producing such similar results from studies conduct by presumably polling different respondents over different years cast doubts on the soundness of the research design, methodology, scope, integrity of survey instruments, the training involved in deploying research assistants, calibre of field researchers, and appropriateness of analytical framework used. Overtime, these deliberate abuses of opinion polls in a manner that appropriates the name of Department of Political Science at the University of Ghana for legitimacy and credibility has the potential to undermine the pivotal role of research in public policy making and socio-economic transformation.

Anecdotal evidence in Ghana over the four years points to the fact that some government policies have visited unbearable hardships on many Ghanaian families. For instance, the collapse of financial institutions has rendered several persons jobless and worsened the family circumstances of those affected; prices of most goods and services have witnessed astronomical increases without commensurate increases in wages and salaries; the country has been experiencing series of corruption related episodes as manifested in the PDS scandal, the Agyapa Deal, the BOST scandal, massive procurement fraud, the NLA scandal, missing galamsey equipment, and several scandals at the Youth Employment Authority; and a growing culture of deception, impunity, despondency, unfulfilled promises, as well as arrogance of government officials. It is thus puzzling that in the face of this level of malfeasance, any scientific research that taps into the lived experiences of Ghanaians would arrive at the conclusions drawn by the polls bearing the name of the Political Science Department. The conclusions are unscientific and insensitive to the feelings and experiences of millions of people who are burdened by the policies implemented by the Nana Akufo-Addo government in the last four years.

Research is an exercise that has high place of pride the world over. It is important to jealously guard against the potential of reducing academic research to a tool that justifies and defends fraud. We are also concerned because the lack of integrity in research has implications on how we transmit the time-tested principles of scientific research to our students. Indeed, research, at no point in time, should be politicised because research results are expected to be essential inputs in policymaking. Doctored 2 research results lead to wrong policy formulation, which has negative implications for socio-economic development.

While we applaud the management of the University of Ghana for the tolerance being exhibited in the face of extreme abuse of academic freedom by some of its lecturers, the inability of the university authorities to confront the growing politicization of research has the potential to negatively affect its rating and undermine its ability to attract research funding. It is obvious that some of the recent polls including those by Centre for Democracy and Development (CDD) and Ben Ephson of the Dispatch Newspaper are rented activities designed to sway public opinion in favour of the NPP. Their true purpose is to deceive the unsuspecting voter.

The real opinion polls are ones that reflect the lived experiences of the people, not those that reflect the wishes of those in power. We urge Ghanaians to dismiss the polls and not allow themselves to be swayed by deception and fraud masquerading as research. We also urge university researches to see beyond politics and conduct researches that benefit all. We will jealously guard against the abuse and misuse of trades in our profession for political purposes.

Napoli has full confidence in Gattuso. The club has released an official statement
Jurgen Klopp: In this world, trust is lost very quickly: either everything is fine, or vice versa. But there are many stages in between
Atletico have agreed the transfer of midfielder Marcos Paulo from Fluminense. The transfer will take place in the summer
Buffon on comparisons to 43-year-old Brady: We can try to break the stereotypes about age-related athletes
Kier and Diaz may miss Milan's match with Bologna due to injuries
Gasperini on 3:2 with Lazio: It was fun, wasn't it? It seemed that the relegation complicated everything, but we scored
Jose Mourinho: Van Dijk cannot be replaced. Van Dijk can only be replaced by van Dijk when he returns
Source https://www.ghanaweb.com/GhanaHomePage/NewsArchive/UG-polls-unscientific-insensitive-to-the-feelings-of-those-burdened-by-Akufo-Addo-s-policies-PI-1120691