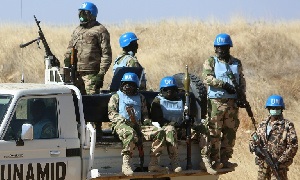 The Security Council on Friday called for political dialogue in the Central African Republic (CAR) after President Faustin Archange Touadera’s re-election was validated.

In a press statement, the members of the Security Council took note of the Constitutional Court’s proclamation of the final results of the Dec. 27 presidential election, which validated Touadera’s re-election.

They called on all stakeholders to respect the Constitutional Court’s decision and reaffirm their commitment to the consolidation of democracy and the rule of law. They encouraged the government and all political actors to engage effectively in dialogue, said the statement.

The council members condemned in the strongest terms violations of the CAR Peace Agreement, as well as violence perpetrated by certain armed groups with the support of former President Francois Bozize, aimed at undermining the electoral process, it said.

They recalled that individuals and entities engaging in, or providing support for acts that undermine the peace, stability or security of the CAR may be designated under the Security Council sanctions regime.

The council members also condemned the hate speech and incitement to violence fueled by disinformation campaigns. They urged all signatory parties to the Peace Agreement to fully honor their commitments and join the path of dialogue and peace.

They stressed the urgent and imperative need to end impunity in the CAR and to bring to justice perpetrators of violations of international humanitarian law and of violations and abuses of human rights. They also encouraged the national authorities to continue their efforts to make the Truth, Justice, Reparation and Reconciliation Commission operational, said the statement.

The council members took note of the request of the CAR authorities to lift the arms embargo. They reiterated their readiness to review the arms embargo measures, through suspension or progressive lifting, in the light of progress achieved on the key benchmarks established by the Security Council.

They stressed the need for the CAR authorities to ensure physical protection, control, management, traceability, and accountability of weapons, ammunition and military equipment transferred to their control.

They reaffirmed their support to MINUSCA’s efforts to implement its mandate through a proactive and robust posture, while recalling the importance of the mission having the necessary capacities to fulfill its mandate and promote the safety and security of the UN peacekeepers.

The press statement was released after the Security Council held a meeting on the CAR on Thursday. In his briefing, the UN secretary-general’s special representative and head of MINUSCA, Mankeur Ndiaye, warned that the CAR faces the grave risk of a setback given the formation of a new coalition of armed groups, the Coalition of Patriots for Change, whose alliance with political actors, in particular Bozize, is now established.