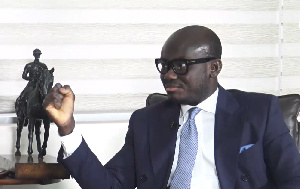 Godfred Yeboah Dame, the Attorney General and Minister for Justice has said with the recent case of a London Court awarding a judgement debt against the Republic of Ghana, he was involved only in the arbitration proceedings.

He explained that, during the proceedings, he conducted the trial with some state hired external lawyers as well as lawyers from the office of the Attorney General.

“I was involved only from the point of the arbitration proceedings…I was entrusted with the conduct of the trial; I conducted the trail together with external lawyers of the state, thus Amofa and Partners; we also had lawyers from the office of the Attorney General that was in August 2020, I was involved,” Dame told Citi TV in an interview monitored by GhanaWeb.

He debunked the assertion that the state did not handle which has led to the US$170 million judgement debt.

“People are now alleging that the state did not handle the matter. Clearly, it was wrong, the matter was actually handled prior to me becoming Attorney General. The matter was handled when I was Deputy Attorney General and I am saying the arbitration which was instituted in 2018 was vigorously contested by the state; where it filed the relevant challenges to the arbitration processes that were comminuted in the trial,” Godfred Dame said.

He further indicated that the trial which was conducted virtually lasted for one week.

“It was not like other matters that we had to travel to London, in this case, we sat in Accra and did the trail virtually and each day, the proceedings lasted the whole; it started from 9 am and ended at 5 pm.

It was a full trial and it was witnessed by various members of the government; the Minister for Energy, John Peter Amewu even came to witness proceedings and saw me on my feet arguing the matter, office of the President sent representatives and all…The trial was in August and the proceedings were adjourned for the delivery of award [judgement] and the judgement was given in January 2021. Ordinarily, that ought to have ended the matter because arbitration proceedings are not appealable. Arbitral awards are final; there is a finality to arbitral awards.

The state was outraged with the imposition of this amount. The judgement debt was $134 million, cost about $3 million and now people are saying $170 million, well, I don’t know where the mathematics came from; I’m not a mathematician, my competence is in law,” Godfred Dame stated further.

The Government of Ghana was ordered by a London-based United Nations Commission on International Trade Law tribunal to pay a contractually defined “early termination payment” of more than US$134.3 million plus interest and costs.

The agreement between the government and GPGC, an independent power producer, was terminated in 2018.

Milan is close to signing 16-year-old winger Parma Traore for 1 million euros
Herkus about Krykhovyak in Krasnodar: It is a great success to get such a player. He will prove himself brilliantly
Pochettino lost 23% of matches at PSG - the worst result under the Qataris
The more the fly spins in the web, the more entangled it becomes. Here is how Belarusian officials and coaches persuaded the athlete to go home
Ronaldinho on Messi's victory at the Copa America: This is the only thing that he lacked. I am very happy for him
Mikel Arteta: Jaka stays. He is a key Arsenal player
Parti injured his ankle in a friendly game with Chelsea. Arsenal midfielder will be examined tomorrow

Give us a unifier as DCE, Sarah Pobee is a failure – Ada Residents plead to Akufo-Addo

Rev Adorsu appeals to Christians to strive for righteousness

Alavanyo Senior High Technical gets new Board of Governors

Dr. UN debunks claims he has impregnated an SHS student

MTN FA Cup: Hearts of Oak on track for double after beating Medeama in semifinal

I didn’t win VGMA Artiste of the Year because I became too proud, God stopped me – KiDi

Oppong-Boanuh charges new IGP, leadership to be united as he retires

‘I stayed in the office for 48 hours’ – Prof. Karikari recounts stress from coup attempts at GBC

‘It started as a joke’

We transport more fuel through barges and pipelines than road