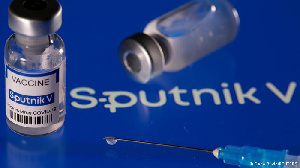 A photo of Sputnik coronavirus vaccine

A Vaccine Expert with the Noguchi Memorial Institute for Research in Accra, Dr Kusi Kwadwo Asamoah, has cautioned the Ghanaian public against mixing the AstraZeneca Vaccine with the Sputnik V vaccine.

He advised the public to ask questions when going in for the second jab in order to know which type of vaccine they are going to be injected with to avoid mixing different vaccines in the body.

Dr. Asamoah further explained that the Sputnik Vaccine comes in two different forms because when one takes the first jab, the second is assured unlike the AstraZeneca that the second jab comes some days later after the first jab.

“So anyone who takes the AstraZeneca vaccine should make sure you don’t mix it with Sputnik vaccine. Because there is still ongoing research work yet to be completed to confirm the health safety of humans that after taking AstraZeneca as the first jab you may take Sputnik as the second jab,” he told Kasapa 102.5 FM.

Dr. Kusi Asamoah disclosed that the World Health Organization (WHO) and all vaccine manufacturers have also advised that after taking the Sputnik vaccine you must go in for the same Sputnik vaccine for the second jab and not any other vaccine.

In spite of concerns about the shortage, the government assured that it has begun bilateral and multilateral discussions with its partners to purchase more vaccines to continue the vaccination till the end of the year.

However, the Ministry of Health last week said it had to resort to the market in the procurement of Sputnik-V COVID-19 vaccines into the country because the Government of Ghana was unable to obtain direct supplies from the Russian government citing scarcity of the vaccines.

The government, according to reports by a Norwegian newspaper has signed the purchase contract for 3.4 million doses of the vaccine with an Emirati official after it received an initial 16,000 doses from two businessmen on March 3, 2021.

Meanwhile, the Technical Lead on Health for Bureau of Public Safety, Dr. Issaka Yakubu Akparibo has advised the Government of Ghana (GoG) to abrogate the contract with the Emirati official in the procurement of the Corona-Virus (COVID-19) Sputnik vaccine from Russia.