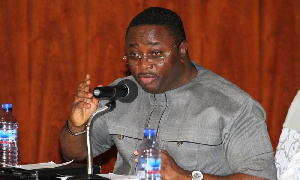 Director of Election of the National Democratic Congress, Elvis Afriyie-Ankrah

Believers of African traditional religion in the Volta region, have been called upon by the National Democratic Congress to invoke their deities to protect them against voter suppression in the upcoming presidential and parliamentary polls on December 7.

The call has become necessary, following an elaborate plot by the governing New Patriotic Party under the leadership of President Nana Addo Dankwa Akufo-Addo, to use fake NPP thugs with police uniforms to suppress votes in the region.

The Director of Election of the National Democratic Congress (NDC), Elvis Afriyie-Ankrah, who triggered the call, encouraged the indigenes of the Volta region which happens to be the electoral world bank of the opposition NDC, not to be intimidated.

Addressing a press conference on the preparedness of the NDC ahead of the December 7 polls in Accra on Wednesday, Mr Ankrah, said events leading to this year's general elections, have pointed to a plan by the Nana Addo administration to intimidate indigenes of the Volta region for the purposes of suppressing their votes.

In its latest intelligence picked up by the party, the Director of Elections, said it is the wicked agenda by the NPP to harm the indigenes of the Volta region on election day as part of the ploy to prevent majority of the people from coming out to vote.

This plot, he stressed is to give police uniforms to NPP vigilantes on the day of elections to physically harass, intimidate and in some cases harm the indigenes.

It is against this hidden agenda that the Director of Elections of the NDC urged the people of the Volta region to protect themselves including using their deities.

"We call on the Christian community in the Volta region to pray against any such disturbances. Adherents of African Traditional religion should equally call on their deities to protect them from any harm that may be caused before during and after the elections ", he noted.

The Volta region is homed to some very powerful deities that can be found on the road to Aflao called 'Nogokpo'.

The 'Nogokpo' deity, according to history is known for peace and justice. Interestingly, it falls in the Ketu South Constituency, which happens to produce the biggest votes for the NDC in the Volta region.

An attempt, therefore, to suppress the votes in this Constituency, will mean that the protection from harm which the NDC Director of Election is urging, would have been activated.

He also said a Citizens Arrest Taskforce in all the constituencies have been set up, to arrest and hand over any suspicious characters in police uniform that will be deployed to the region and that all officers should properly be marked with their names and service numbers for easy identification.

"We hereby call on all traditional Asafogroups in all traditional areas to be on high alert and collaborate with legitimate security personnel to flush out any miscreants in their communities ", he added.

According to him, this plot to suppress the people of the Volta region which is in connivance with the Police High Command, saw the Inspector General Of Police announce in October that there would more security deployment in the region during election day.

The Director of Elections, who spoke on a number of concerns, further warned the NPP not to cause mayhem with the intention of running away when things degenerate.

Jose Mourinho: Van Dijk cannot be replaced. Van Dijk can only be replaced by van Dijk when he returns
Mikel Arteta: Ødegård young but already played at the top level. It's great that Arsenal were able to sign him
Ex-Manchester United and Borussia midfielder Kagawa has joined PAOK
Thomas Tuchel: Chelsea will play bravely and in an attacking manner
Zoomers should be provided with exciting tournaments. In the top 5 leagues, there are 1,826 matches, in the Champions League - only 125. Agnelli on the future of football
Gattuso's relationship with De Laurentiis has cooled. An extension of the contract now looks unlikely
Solskjaer on winter transfers: Manchester United have a strong, high-quality squad. I would be surprised if we sign someone
Source https://www.ghanaweb.com/GhanaHomePage/politics/Volta-deities-to-stop-NPP-vigilantes-in-police-uniform-against-vote-suppression-on-Dec-7-NDC-1120661

Rawlings was a just, selfless and charismatic leader - Oguaa residents

Ghana gets €9.7m EU grant to improve access to power in sub-region

Ned Nwoko Open Up On Secret Of Attracting Young Girls

Member of GFA’s Division One League Board dead

Legacies and ideologies of Rawlings must be upheld – Citizens

Rawlings was a just, selfless and a charismatic leader – Oguaa residents

Food and Drugs Authority to be more accountable in 2021

FDA to be more accountable in 2021

“Which Location In Nigeria Can Be Used To Name A Child?”

Anlo Traditional Area to organise another funeral for Rawlings

Rawlings’ ‘place of honour’ becomes ‘photo booth’ for some Ghanaians

After The Ghana Tourism Authority Cancelled His Movie “Freedom And Justice”, Kobi Rana Is Set To Release Another Film On Valentines Day – See Why

How 'big' hospitals in Accra turned away a dying patient over shortage of hospital beds, fumigation exercise