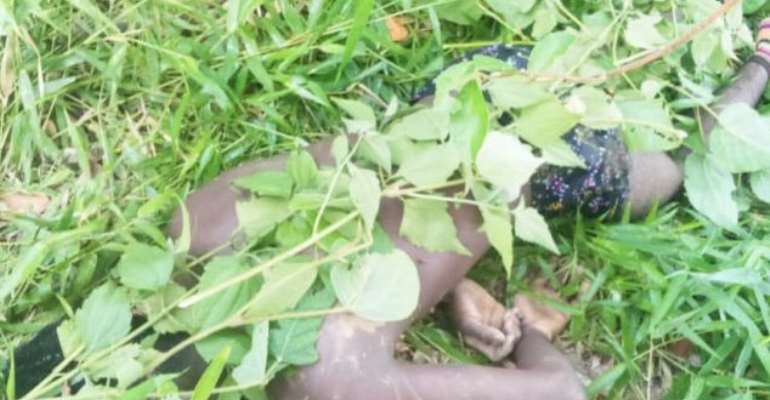 The lifeless body of Timothy covered with weeds

A 17-year-old Togolese met his untimely death last Thursday when he drowned in River Ankobra at Wassa Asikuma in the Wassa Amenfi East Municipality of the Western Region.

The deceased whose name was given only as Timothy was among eight people, all from Togo, who were going to claim their money for work done on a farmland across the river bank.

According to the friends, they all agreed that since the water level was low, they would walk through the river using a particular route, but Timothy allegedly decided otherwise.

According to them Timothy insisted that the route they wanted to use was too long because he could take a short cut by swimming to cross the river.

They claimed that Timothy ignored their advice not to swim subsequently dived into the river.

From there, they could not see Timothy again.

“We then started shouting for help. One man who felt he could save Timothy dived into the river. However, he was also almost drowned himself but for the timely intervention of some professional divers.”

They said the man was rescued and taken to the hospital and was treated and discharged.

DAILY GUIDE gathered that the chief and elders of Wassa Asikuma later poured libation to pave way for divers to go into the river to look for Timothy and at about 4pm same day, thes lifeless body was found.

Personnel from the Wassa Akropong Police Command were at the scene to conduct investigations after which the body was released to the family for burial.

Ministry to use CMD to enhance revenue collection

‘I Have Never Been Under Any Record Label Before’

Man reveals plot to ship hundreds of guns to Ghana

Does OV herself think she needs help from Stonebwoy?”

The ultrathin new iMac lost a lot more than size

Do not draw police officers into land litigation

Organic and biodiversity compliant agri-produce will sell on EU market

Ramos and Sevilla, a complex relationship unlikely to be revived

Four players nominated for NASCO player of the Month for May