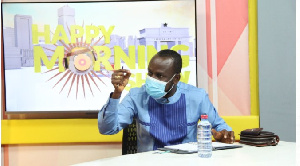 Member of Parliament for the Achiase Constituency, Kofi Ahenkorah Marfo

Member of Parliament (MP) for the Achiase Constituency, Kofi Ahenkorah Marfo has asserted that recent rumours of a scramble for the NPP 2024 flagbearership can cost the party its break the 8 agenda.

According to him, the party must now be focused more than ever on rallying to support President Akufo-Addo realise his vision for the country. He believes it is by this achievements and many others that the party can launch the break the 8 campaign come 2024.

“We’re not ready to break the 8 if we are competing amongst ourselves on who leads the party early in President Akufo-Addo’s 2nd term. We should be focused on why we lost most of our seats and why our votes dropped as compared to the 2016 elections.

The MP shared this view in an interview on the Happy Morning Show hosted by Samuel Eshun and aired on e.TV Ghana and Happy98.9FM.

He intimated that the NPP needs to focus on making the party more attractive to Ghanaians. “We need to consolidate the policies of President Akufo-Addo’s 2nd term and use that for our election 2024 bid and not focus on starting the flagbearership debate at this early stage”, he reiterated.

Kofi Ahenkorah Marfo furthered the leadership of the party at all levels should also be relooked at and they (leaders) should not become complacent. “This is the time for us to work extra hard. The behaviour of some polling agents caused our fortunes to dwindle in the 2020 general elections. Some Regional Chairpersons didn’t even bother to go to their constituencies to assess the situation on ground. All these need to be reviewed if we want to break the 8”, he repeated.

The NPP wants to be the first party in the country’s democratic history to break the eight-year rule, hand over to itself and continue the transformational agenda beyond 2024.

Government urged to close down churches for covid-19 non-adherence