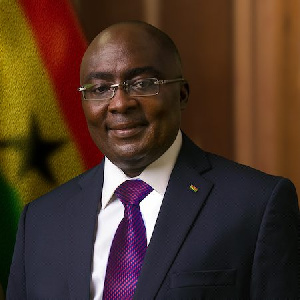 Member of Parliament (MP) for the Achiase Constituency, Kofi Ahenkorah Marfo does not agree with calls by a section of the political class, for Vice President Dr. Mahamudu Bawumia to be made the party’s 2024 flagbearer without contest.

These group of people believe by virtue of his position as Vice President, it is only right he is made the NPP’s flagbearer for the 2024 elections.

“I don’t agree with those saying Dr. Bawumia should automatically be made flagbearer for the NPP’s 2024 election campaign. The NPP is a democratic party which has policies and directions and which need to be respected”.

Accordingly, the NPP MP agrees the party’s constitution should be regarded without exception.

Speaking in an interview with Samuel Eshun on the Happy Morning Show, the MP cited instances where the party had stuck to its core, regardless of similar calls.

In 2012 there was still a contest and no one said Nana Addo had contested for the position twice, hence should be handed the flagbearership”.

On his authority, President Akufo-Addo who is a founding member of the NPP also respected the party’s constitution, and was not handed the flagbearership on a silver platter.

He however shared Dr. Bawumia can be made the automatic flagbearer for the NPP’s 2024 election bid by popular acclamation.

“We can only acclaim a person if he or she is not being contested by anyone. If Dr. Bawumia is the only one who contests for the flagbearership position, then it can be done”, he stated.

Griezmann, ter Stegen, Langle and Pedri did not receive ratings from Marca for the game with Celta
Eibar relegated to Segunda after 7 years in the Primera, the last match of the season - with Barca
In La Liga, there is still fun: Barcelona pulled away, Atletico almost fell from first place (lost 0:1 on k 82nd)
Barcelona for the first time under Messi, three matches do not win at home in La Liga
Suarez scored the 10th winning goal of the La Liga season
Simeone on 2:1 with Osasuna: Football is about taking chances when it really matters
Barcelona did not win La Liga in both seasons after buying Griezmann for 120 million euros. The only trophy in 2 years - the Spanish Cup

Women are equal partners in development

Two friends before court for stealing

Achimota Preparatory School to be managed by GES - Reports

Fuel price to shoot up again from May 17

Fuel prices to shoot up again from May 17

GIBA, PRINPAG and GJA react to brutalities against journalists

Transport fares to go up by 20% from Monday

I erred in admitting evidence in favour of Opuni, Agongo - Judge admits

My son will do better than me – Stephen Appiah

Farmer who was charged for breach of trust granted bail

Here are the 4 highest human settlements in Ghana

Be bold, step up and tell your stories—FIDA Lawyer Irene to victims

Joseph Paintsil suffers relegation in the Turkish Superlig with Ankaragucu

National Security must be scrutinised like any other body – Kpebu