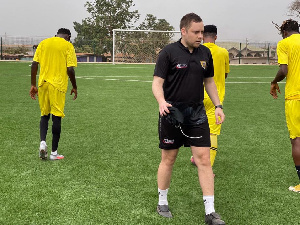 AshantiGold SC head coach Romain Folz says his side deserved the win against Accra Hearts of Oak on matchday 19 at the Len Clay Sports Stadium.

A late penalty converted by AshGold captain Amos Addai helped the French coach to secure his first win of the season.

The former Bechem United coach managed to pick a draw against Karela United in his first game and masterminded a win against Accra Hearts of Oak at home.

Romain Folz has said they deserved to win the game.

“We deserved the win. I am very proud of the players", the French coach said at the post-match conference.

"We said before every game that we will do our best to win every game. So today that was the case and I am very happy. What we have to do to be a solid team is to be better defensively”.

AshGold has moved to the ninth position on the league table after the win.

The miners travel away to Techiman to face King Faisal at the Ohene Ameyaw Park on this matchday 20.

The North Korean national team has withdrawn from the 2022 World Cup qualifying tournament
Raul is the favorite for the post of coach of Real Madrid, Allegri and Lev are on the list of candidates
Fonseca on 2-0 in the Rome derby: Roma did not allow Lazio to play the way they like
Golovin about learning French: I understand football terminology, but the language itself is not so simple
Chiellini on refereeing the game against Inter: I can't say what I think. But Juve did not steal anything
Alaba bought 2% of Aust for 500 thousand euros. He helps his native club win debts
Just look at how happy Gerrard is. He lifted the first trophy of his coaching career