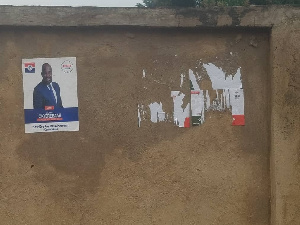 The Zongo Caucus Coordinator of the opposition National Democratic Congress (NDC) in the New Juabeng South constituency of the Eastern Region, Tijani Ahmed Maikano has cautioned the Zongo youth against taking down NDC campaign posters in the area, adding that the youth are usually hired to perpetrate such acts.

According to him, to foster peace in the Zongo communities, the inhabitants must be careful with their involvement in politics.

In an interview with CTV's Kamal Ahmed, Mr Maikano accused members of the governing New Patriotic Party (NPP) in the area of tearing down NDC posters.

He, therefore, called on opinion leaders in the Zongo community to call on the NPP in the area to desist from that act or face punishment.

“We will deal with such people mercilessly if they are caught,” he noted.

Maguire Azpilicueta knocked the seizure of MMA: a penalty not given either on the pitch or after the OPTIONS check. Controversial, isn't it?
Neville on van de Beek at Manchester United: he's probably thinking: What am I doing here?
De Gea after 0-0 with Chelsea: Manchester United deserved more. The goalkeeper saved them
Lewandowski has scored every 37 minutes this Bundesliga season. He has 10 goals after 5 rounds
Azpilicueta about capturing Maguire: VAR can perform better. Why not take 20 seconds to review?
Real Madrid beat Barca at camp Nou for the first time since August 2017
Conte on Lukaku: in a year, he has improved in everything and has become different. I always called him an uncut diamond
Source https://www.ghanaweb.com/GhanaHomePage/NewsArchive/We-ll-deal-with-you-if-you-don-t-stop-tearing-our-posters-NDC-Zongo-Coordinator-1063129

Ghana is now the envy of many West African nations – Dame

Mahama warns of an uprising over growing youth unemployment

Lee Addy eulogizes Abedi Pele for teaching him everything football

Rawlings describes his mother as a ‘strict and uncompromising disciplinarian’

Edo govt extends ultimatum for escaped inmates by one week

Sustainable Development Goals ‘unlikely’ to be met by 2030

Prof. Opoku-Agyemang reiterates need for women to be empowered

Eagles must take friendlies seriously to improve in FIFA ranking,

‘End SARS Protest Is Beyond Police Brutality. It Is Battle Between The Rich And Poor’ – Filmmaker Chika Lann

Minority to introduce bill to set up Presidential Commission on debate

I wish you die in prison

Paul Ayongo named Man of the Match in Portugal

Kotoko, AshGold successful with application to compete in Africa

Working from home is here to stay - Michael Kwofie

My gov’t made access to pension funds easier – Akufo-Addo

You want four more for what? – Mahama asks Akufo-Addo

NPP's number one position is a step forward - Bawumia

69 killed in protests to end police brutality in Nigeria

AU council calls for urgent de-escalation of unrest in Nigeria

NPP will be strategic in international engagements

Capture beauty under cover of darkness with HUAWEI nova 7i

NPP’s number one position is a step forward- Veep