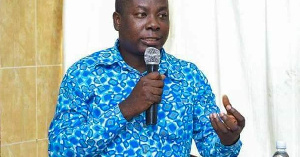 The spokesperson for Vice President Dr Mahamudu Bawumia says the ruling New Patriotic Party (NPP) will force the opposition National Democratic Congress (NDC) which has gained notoriety in propaganda to campaign on records instead of the insults and impunity as it always exhibits.

According to Dr Gideon Boako , the NDC’s John Mahama per the records has nothing to offer Ghanaians ahead of the 2020 polls

“NPP always campaigns on records. We have done enough, so our records would win us the elections; if not we wouldn’t throw a challenge to the NDC for us to compare records”, he mentioned on an Accra based radio station monitored by MyNewsGh.com

Explaining further Dr.Boako said “the NDC party doesn’t like campaigning and comparing records. If you remember in 2008, when candidate Akufo-Addo threw a challenge that we should compare and contrast records, then running mate Mahama said it’s an exercise in mediocrity”.

“Our friends in the NDC, they don’t like comparing records; it is not all of them though but majority of them…their language is full of insults and maligning”, said Dr Boako.

But he pointed out that “we will force them to compare records that is what president Akufo-Addo said ; let us compare records. Mahama should show us what he has done and can do.”

“During his time he created dumsor but Akufo-Addo ended it”, he argued.

He also challenged Mr. Mahama to tell Ghanaians how he would have managed the coronavirus pandemic in Ghana.

“When Ghanaians were sleeping in darkness and heat, he did little. When coldstore and printing press operators were suffering, he told them ‘yentie obia’. He and Professor Nana Opoku Agyemang canceled teachers and nurses training allowances. If they were still in power, how will they manage nurses and teachers wages and allowances in this covid 19 era?” he said.

“Look at the money Akufo-Addo has provided to take care of water and electricity bills for Ghanaians in this difficult times. If Mahama was the still the president, you could have imagine what will happen to Ghanaians”, he added.

Sanchez finished the match against Bayer, despite the injury
Solskjaer is the fifth coach with whom Manchester United reached the semi-finals of the European Cup
Manchester United are set to buy Sancho this summer despite Borussia's claim that he is staying
Shirokov beat the judge at an Amateur tournament: promised that # # # # # [vdarit] for a red card-and # # # # # [vdarit]
Brunu has scored 11 goals in 20 games for Manchester United. 7 of them were penalties
Lukaku has scored in 9 consecutive Europa League games. This is a tournament record
Konstantinos Tsimikas: Liverpool is the biggest club in the world. I supported them as a child
Source https://www.ghanaweb.com/GhanaHomePage/NewsArchive/We-ll-force-the-propagandists-in-NDC-to-campaign-on-issues-Dr-Gideon-Boako-1009180

Minority demands audit into payment for customers of collapsed Banks

Lucky Mensah fears for Ghana if Mahama is re-elected

NDC helped non-Ghanaians to register, unleashed thugs on us – NPP

JUST IN: Patapaa Has Reportedly Been Hospitalized Due To Poisoning (Video)

How Rawlings made me look for Mills – Ahwoi recounts

NPP And NDC Have Nothing To Offer Ghanaians,I’m Going Independent – Yvonne Nelson

Just In: Patapaa Has Been Poisoned(Video)

Oga! Gone, but not forgotten

Wake up everybody: Preparing for the next Global Emergency

Patapaa In Critical Condition After He Was Allegedly Poisoned

TB Joshua ‘runs away’ from Mahama

Why The Shameless Fight Over Wealth You Won’t Carry To Your Grave?-Christiana Awuni Quizzes Mzbel And Tract Boakye

One dead in Nkrankwanta clash

Onua TV to broadcast in other local dialects – General Manager

Efia Odo goes raw for a photoshoot in new video

Apology of Rioting Students is in order-Christian Council

Kuami Eugene Apologies To DopeNation Over His Comment After They Part Ways With Lynx Ent.

Minority wants payments made to customers of collapsed banks, others audited

‘A Big Man Called Me & Asked Me Not To Talk About The MzBel, Tracey Boakye Saga On Air’ – Peace FM’s, Akwasi Aboagye

Covid-19: GFA sets out modalities for league to resume

Case Against Effutu NDC Parliamentary Candidate Settled Out Of Court

Hunter Remanded For Abetment Of Crime

Ashawo is my title and I enjoy it- Afia Schwarzenegger