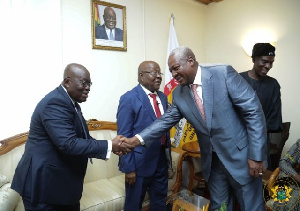 Former President John Dramani Mahama says the National Democratic Congress (NDC) has what it takes to clean up the “mess” and “rot” created by the Akufo-Addo regime.

Addressing a durbar of chiefs and people of Adjei Kojo in the Tema West Constituency on Thursday, October 29 as part of his five-day campaign tour of the Greater Accra Region, the NDC leader said his party is very much aware of the “mess” that has been created by the Nana Addo Dankwa Akufo-Addo government since assuming office in January 2017.

He was surprised at how the Akufo-Addo regime ended up creating this given that it inherited a sound economy from the Mahama administration.

“In 2016, I passed the ESLA which is the Energy Sector Levy Act and that act alone in 2017 brought GH¢3 billion. And who inherited that money? President Akufo-Addo inherited that money. “I set up the Ghana Infrastructure Investment Fund (GIIF) and I put seed money of $270 million and I left it to President Akufo-Addo. Where is the money? When Covid happened, but for the Stabilisation Fund that was set up in my time, the GH¢1.2 billion that they had taken from the Covid fund to provide food for the people, to provide PPEs for people and stimulus packages for people, if I hadn’t set the Fund, we wouldn’t have gotten that GH¢1.2 billion,” he said.

Mr Mahama said his government also left behind more than $300 million in the Sinking Fund, adding all of these are verifiable.

“How much is he going to leave for President Mahama in 2021?” he wondered.

Mr Mahama said the Akufo-Addo regime has emptied the coffers of GIIF and has made no contribution to both the Sinking Fund and the Stabilisation Fund.

He added that the Akufo-Addo government has rather succeeded in mortgaging the energy sector levy for the next 10 to 15 years, including the GETFund which government has also mortgaged for 10 years, he claimed.

“And so he is rather going to leave a mess to the new NDC government that is coming after 2021. But like I said, let us never give up hope because we are masters at turning things around. We will inherit a mess but by God’s grace, we will turn things around.”

Balotelli is close to a move to Vasco da Gama. He was offered 2.5 million euros a year
Van Dijk - best Central defender of 2020, Trent-right, Robertson-left (ESPN)
Massimiliano Allegri: Ronaldo is a top player in terms of mentality. He has a new goal every year
Borussia Dortmund presented a collection with Spongebob as part of a deal with Nickelodeon
Woodward on Manchester United and trophies: there is a lot of work Ahead to achieve the stability needed
Neuer - best goaltender in 2020, Alisson-2nd, Oblak-3rd (ESPN)
Liverpool are Interested in 21-year-old Leipzig defender Konate
Source https://www.ghanaweb.com/GhanaHomePage/politics/We-ll-tidy-up-your-mess-Mahama-tells-Akufo-Addo-1097038

Vote for the CPP for a people’s government

UCC outlines issues that will determine outcome of election 2020

Our AfCFTA goals will fail without private sector inclusion-Minister

We will win five seats in the north

Asamoah Gyan should come down to the local level - Yahaya Mohammed

Hearts of Oak coach saddened after stalemate against Karela United

Corruption has no strong connection with NPP Government — Mustapha Hamid

Let peace be the ultimate winner for Ghana - CSOs appeal

Akufo-Addo is not corrupt, let's do clean politics - Allotey Jacobs

Akufo-Addo took a bribe, nothing can change that - NDC

PNC poise to win five seats from the north

Kwadwo Wiafe’s Widow, Reeka Pens Down Emotional Post To Celebrate Him 6 Months After His Death

Let Peace be the ultimate winner for Ghana

‘Most Of My Girlfriends Broke Up With Because Of Hajia4Real; They Thought I Was Dating Her’

One killed in blast at headquarters of Serbian state broadcaster

Bullet Rubbishes Claims That Wendy Shay Has Warmed His Bed; Reveals Why He Won’t Date Any Female Artiste He Works With

GRCS march for peace in Bongo

UN alarmed by thousands of allegations of police violence in Belarus

Win And Prove Them That Actors Are Serious Minded People

Czech Republic set to phase out coal by 2038

‘I’m Proud Of The Woman You’ve Become’, Tacha Celebrates Her Sister On Her Birthday

Yamoransa Model Resource Centre: The the stakes of Helping Africa Foundation and Friends of Yamoransa Foundation

‘God Is The Main Person Behind My Success’

Churches in Sekyere East pledge to contribute to peaceful elections

Bullet Recounts How People He Worked With Betrayed Him

December 7 will be a silent revolution

Ofosu-Ampofo ‘bites’ EC over ‘No Facemask, No Vote’ directive [Audio]

Video of Rev. Obofuor and wife getting lovey-dovey on a Yacht in Dubai

Patience Akyianu is the Marketing Woman of the Year