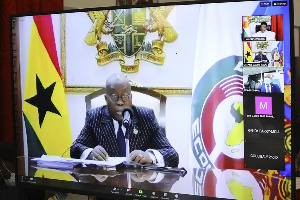 President Nana Addo Dankwa Akufo-Addo has urged African leaders to continue supporting the fight against terrorism in the sub-region.

He reaffirmed ECOWAS strongest condemnation of these attacks in our Region and Community, and deplore the activities of these criminals, terrorist groups.

“We sympathise and extend our deep condolences to affected countries and the families of the victims.”

According to him, “these developments must reinforce our conviction that we must pursue, even more vigorously, the actions we have begun, with the rapid implementation of the decisions of our Extraordinary Summit on Terrorism, held on 14th September 2019. This concerted effort, which must be a major priority objective of the Community, is the best way for us to address collectively the security challenge, and give ourselves the means to ensure the security of the populations of our Community. Our dignity and our sovereignty are at stake.”

He commended countries who have contributed to the fight against terrorism saying: “I thank all Member States that are making significant efforts to support our initiatives, in this regard, especially those that have begun to pay their financial contribution to the one billion United States dollar (US$1 billion) ECOWAS Regional Security Fund (ERSF), created in support of the 2020-2024 Anti-Terrorism Action Plan. Raising this money has to be a high priority for us, because it enables us to act independently in this crisis. Your Excellencies will recall that the 2019 Summit created the Fund to cover a five (5) year period, 2020-2024. The UEMOA countries committed to contribute five hundred million United States dollars (US$500 million), whilst the Federal Republic of Nigeria also pledged three hundred and fifty million dollars (US$350 million); leaving a balance of one hundred and fifty million dollars (US$150 million) for the six (6) remaining countries and other sources.

The remaining one hundred million dollars ($100 million), which is to be voluntarily paid by the other five (5) countries and other sources, will complete the establishment of the entire Fund. We need to do this as quickly as possible.

We also need to engage on the growing menace to the maritime security of our region. Acts of piracy and maritime destabilization are on rapid increase in the Gulf of Guinea, illustrated by the data, which indicate a forty percent (40%) rise in pirate activities in the Gulf in 2020 over 2019. This calls for a strong regional response,” he concluded.

Alaba wants to play in midfield at a new club. This condition he put forward to Real Madrid and PSG
Leonardo: A decision on Mbappe's contract will be made soon. We also talk to Neymar, it's a pleasure to deal with him
Eric Bailly: If you ask me: Messi or Ronaldo?, I will say: Ramos. One of the best in the history of football
The head of Kick It Out Toxic masculinity in football is the problem. Some consider it normal to lash out at the family after the defeat of their team
Gladbach held off Pep's attack, but City's game without the ball is power. A bonus was the Bernard - he played as Gundogan
City have a lot of money to buy a lot of incredible players. Guardiola joked about the reasons for the winning streak
First, Zidane famously outsmarted Gasperini with a no-striker scheme. And then there was a deletion-and confused the plans of both teams
Source https://www.ghanaweb.com/GhanaHomePage/NewsArchive/We-must-continue-to-fight-against-terrorism-Akufo-Addo-to-ECOWAS-1162393

Where else do your children know aside Accra? – Joe Wise asks Okaikoi Central MP

Ridge Enclave: Roads to be closed for relocation of underground utility line

Small and Medium-scale Enterprise urged to take advantage of AfCFTA

Coronavirus vaccines have nothing to do with ‘666’ prophecy – Religious leaders

Mohammed Polo to petition President Akufo-Addo over $51,000 debt owed him

How airport slots are allocated

U-20 AFCON: We are ready for Cameroon- Black Satellites coach Karim Zito

Pressure mounts on ‘silent’ Akufo-Addo to speak on LGBTQ+ issue

Why you should trust the coronavirus vaccines - FDA Boss explains

Coronavirus: Convince your people to get vaccinated – Awandare to chiefs

Watch highlights of Hearts of Oak's victory over Liberty

Today in History: Former presidential staffer in shock after police allegedly pulled gun on him

‘I will complete Cape Coast airport during my tenure’- Ofori Asiamah

Amewu apologises for ‘I will kill you all’ comment [Audio]

Yong Dakpemyili Chief wanted by Police with 5 others, 15 suspects arrested

I Have No Interest In Tinubu’s Presidential Ambition, Says Fayose

JHS student and his gang attack teacher over homework

Monitor your children's cartoons, homosexuals are after them - Sam Pyne tells parents

My Ordeal In EFCC Custody Unforgettable

Come out and speak, your silence is worrying; treat LGBTI issue as a matter of national security — Group to Akufo-Addo

Consider the police, if you want to strengthen institutions against corruption - Governance Expert advises

Coronavirus: Religious leaders among first to be vaccinated in Ghana

Mahama Insists On Run-off In Closing Address To Supreme Court

Water from my Bekwai tap is like mud, very dirty – Dep. Speaker of Parliament

Stop Disrespecting Me Or I Will Work Against You, Fayose Threatens Makinde

Coronavirus: This is what happens if only few Ghanaians take the vaccine

U-20 AFCON: Ghana coach Zito unshaken ahead of Cameroon showdown

Shatta Wale releases diss song plus a video for Samini