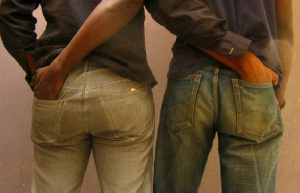 A photo of homosexuals

Private legal practitioner, Lawyer Tachier Atiedu says it would be proper for Ghana top formulate laws to stop the advocacy and practice of homosexuality.

The lawyer says if Ghana has an Act on mosquitoes, then it should introduce a law to make the activities homosexuality criminal.

He said Ghana cannot and should not entertain homosexuality because it is against our cultural values and laws.

Those who argue on the issue of rights he posited is neither here no there.

He explained that the laws on unnatural carnal knowledge although makes, LGBTQI activities criminal lacks clarity on the activities of lesbians hence, there should be a law that will target criminalising all forms of homosexuality once and for all.

Section 104(1)(b) of the Criminal Offences Act says: “A person who has unnatural carnal knowledge of another person of not less than sixteen years of age with the consent of that other person commits a misdemeanour”.

He explained that unnatural carnal knowledge means penile penetration of anything other than the vagina.

According to him, not only does the Ghanaian culture frown upon it, the laws governing the State make it criminal.

Meanwhile, he has noted that the tall political order usually influences the inability of some leaders to firmly oppose pressure from the western world.

He said some leaders opposing it due to the consequences that could come from the aid countries receive.

He however asked our leaders to be firm and reject it even if we will go hungry as a people.

He charged MPs to introduce Private Members Bill for a law to be passed on criminalising the act once and for all.

President commissions phase one of B5 Plus Steel Plant

Green Ghana Project to plant 5 million trees in a day

‘The players made us proud’

1D1F: President commissions phase one of B5 Plus Steel Plant

A lot of people tell me to go back to school

Biden to withdraw all US troops from Afghanistan by September 11 |

VIDEO: I Am Not A Stingy Man, Rose Was Just Demanding Too Much From Me And I Lost Interest

Policemen, others in court for agreeing to secede from Ghana

Mr. Logic Recounts How He Lost GHC7,000 To A Fake Mallam For A Better Life

G7 concerned by Russian troop build-up on border with Ukraine

Basket and hat weavers trained on registration of GIs

At least 10 dead in Congo protests against UN mission

Moderna vaccine rolled out in England as country hits target

Give ECG MD a fair hearing

“I Can’t Do Tattoos And Piercings Because Of My Mom,” Says Mumy’s Boy, Kuami Eugene

Dumsor Is Dumsor! Stop Using Big Grammar To Confuse People And Help Us Fix The Problem!

Why We Suspended Protest Against Buhari Medical Trip -Omokri

Chinese exports rise by 30.6 per cent in March

‘You will come back stronger from injury’

Get infected by ‘Greenness Virus’ now to save Ghana

Get infected by 'Greenness Virus' now to save Ghana — Ghanaians told

26 landguards who caused mayhem at funeral in Apam granted bail

Police intercept bus with over 250 kilogrammes of marijuana

Beat diplomacy in this coronavirus era with innovation

Increase in electricity tariff may lead to rise in power theft

Malta will pay tourists for holidaying in the country

Anger as land guards demolish Church, other properties at Kasoa

GBA took £5000 from the bout they claimed I forged documents

'You will come back stronger from injury' - Ernest Asante told

5million trees to be planted in a day - Abu Jinapor

CEO of B5 Plus 'begs' Akufo-Addo to solve water, power challenges