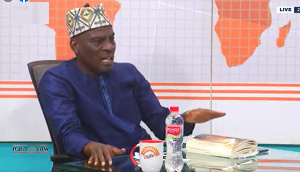 The Minority Leader, Haruna Iddrisu, has emphatically stated that their side of the House in Parliament stand oppose LGBTQI+ rights in Ghana.

In a press conference held on Friday, October 15, 2021, he stated that the minority stand opposed to the introduction, formalization and legalization of LGBTQI+ rights in Ghana.

He, however, posited that the Minority would insist on a clause by clause voting on the bill introduced before the House, seeking to criminalize all forms of LGBTQI+ activities.

Mr. Haruna Iddrisu indicated that the minority would insist clause by clause votes on every word during the consideration stage of the bill.

He added that parliament would do what is legally needful within the 1992 constitution and therefore urged every member of parliament (MPs) of both sides of the house to get countered during the passage of the bill.

He noted that members of parliament are representatives of the people, and the citizens of the country should be assured that parliament will work hard to pass the ‘Promotion of Proper Human Sexual Rights and Ghanaian Family Value Bill 2021 to law.

It will prohibit a person from providing or participating in any form of surgical services to enable gender reassignment or create a sexual category other than the category of a person assigned at birth, except where the surgical procedure is to correct a biological anomaly, including intersex.

Anyone found culpable is liable, on summary conviction, to a term of imprisonment of not less than three years and not more than five years or both.