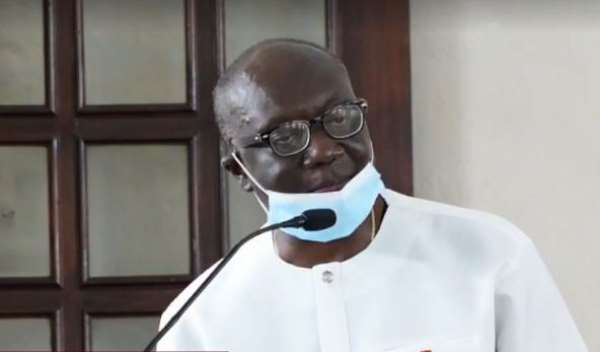 Finance Minister, Ken Ofori-Atta has assured members of the #FixTheCountry movement that the Akufo-Addo administration remains resolute in delivering on its promises to fix the country's problems.

A group of Ghanaians are unhappy with what they call the economic challenges in the country.

Members of the movement had expressed displeasure over successive government's failure to improve the living standards of Ghanaians on Twitter using the hashtag #FixTheCountry.

They cited dumsor, unemployment, poor healthcare systems as proof of successive governments' mismanagement of the country.

Reacting to their concerns at a press briefing on Sunday themed ‘rebuilding the Ghanaian Economy’, the Minister said despite the economic impact of the COVID-19 pandemic, the government’s resolve to fixing the country remains unbroken.

“Notwithstanding the challenges presented by the COVID-19 pandemic, just like President Akufo-Addo said on February 21st, 2017, ‘I was not elected by the overwhelming majority of Ghanaians to complain or compare, I was elected to get things done, to fix what is broken and my government and I are committed to doing just that,’ we thus commit to working with fellow Ghanaians to do just that.”

“The good people of Ghana have given us the mandate to get things done. For us as a government, this is a clarion call for a national conversation on the shared burden to reduce the social contract of our democracy. At its minimum, we should ensure social justice and social mobility for all Ghanaians to provide an economic system in which each citizen is guaranteed the opportunity to show their full potential. I will commit to working with Ghanaians to fix the structures that will connect Ghanaians to this path,” he added.

Mr. Ofori-Atta further outlined some strategies the government has adopted to address the issues raised by the members of the group.

“In the coming days, we will move swiftly to address some of the issues that the #Fixthecountry group has raised. First I am working with the Ministry of Water and Sanitation to immediately ensure potable water to areas with critical need. Second I am working with the Ministers of Roads and Highways, Transport and Interior to address congestion along the major highways.”

On job creation, he said “we are fast-tracking the implementation of the $200 million jobs and skills programme and economic transformation programme to enhance job creation. This intervention is designed to facilitate new and expanded private sector businesses to employ more people.”

This he believes is a more sustainable way to rebuild the economy instead of expanding government employment schemes.

The “#FixTheCountry” campaign has been trending online since it started on Twitter a week ago.

It has since become more organised, with its members attempting to hold a demonstration on May 9.

The planned demonstration was however stifled by the state after the Ghana Police Service secured an injunction against it.

The court ruled that the planned protest would not be able to come off until the restriction on public gatherings is lifted.

Conveners of the protest have now moved to challenge the injunction.