A local resident is seen with barrels of water in Baringo, northwest Kenya, March 12, 2015. Residents of Baringo County are experiencing extreme cases of hunger as a result of the long periods of drought in Kenya. According to Kenya's Devolution Cabinet Secretary Anne Waiguru, a total of 1.6 million people in arid and semi-arid parts of Kenya are in danger of dying as a result of hunger. (Xinhua/Simbi Kusimba)

The United Nations World Food Programme (WFP) said on Friday it has secured 194.5 million U.S. dollars to help fight hunger in Kenya amid a severe drought.

The WFP said it will use the money to provide critical food and nutrition assistance and resilience-building initiatives for thousands of people facing the worst drought in four decades.

Lauren Landis, WFP’s Country Director in Kenya, said the funding will enable the UN agency to scale up its drought response by providing food and cash assistance to 535,000 people facing emergency levels of hunger, treat malnutrition in 570,000 young children, pregnant women, and breastfeeding mothers, and increase food rations to 80 percent for over 500,000 refugees.

“The WFP is rapidly scaling up life-saving assistance to support more drought-affected families whose livelihoods have been devastated by four consecutive failed rainy seasons,” Landis said in a statement issued in the Kenyan capital, Nairobi.

She said the WFP will also continue providing resilience-building initiatives such as rehabilitating irrigation infrastructure and livelihood diversification programs such as beekeeping and the introduction of drought-tolerant crops for 370,000 people.

“There is still no end in sight to this drought crisis and we call on all donors to ensure predictable and sustainable funding through this year and well into 2023 to save lives and stop more people from falling into deeper levels of hunger,” said Landis. 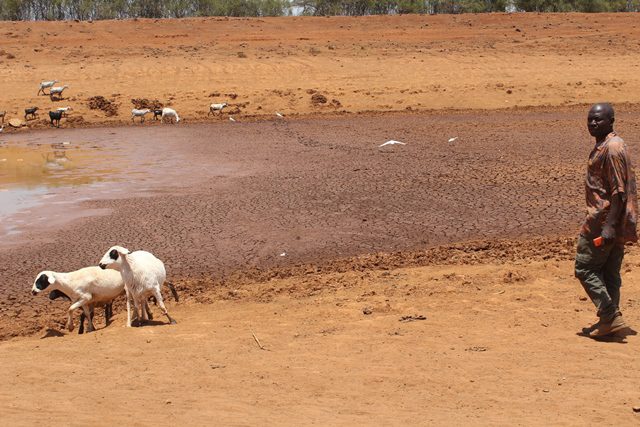 A local resident is seen with his cattle in Baringo, northwest Kenya, March 12, 2015. Residents of Baringo County are experiencing extreme cases of hunger as a result of the long periods of drought in Kenya. According to Kenya’s Devolution Cabinet Secretary Anne Waiguru, a total of 1.6 million people in arid and semi-arid parts of Kenya are in danger of dying as a result of hunger. (Xinhua/Simbi Kusimba)
There is currently 3.5 million food insecure Kenyans due to drought according to the 2022 Long Rains Assessment report released in August.

It says over 700,000 people are at emergency levels, an estimated 940,000 children (aged 6-59 months), and 135,000 pregnant women and breastfeeding mothers across the country are acutely malnourished and in need of urgent treatment.

The report also estimates that the number of food insecure people could rise to 4.35 million by October as the drought worsens. Enditem

ECOWAS Experts, Ministers for Mines and Hydrocarbons meet in Dakar