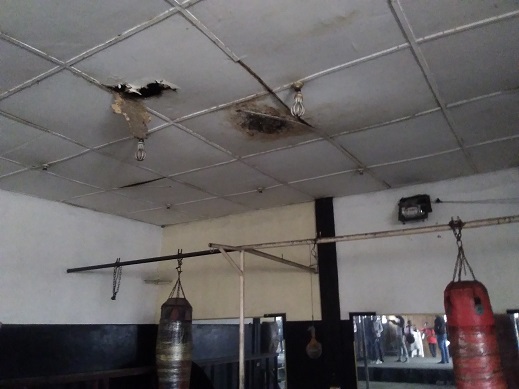 The Will Power Boxing Gym at James Town is really in a bad state and crying out for support.

The former well equipped boxing gym founded and fitted by the late boxer / trainer Napoleon Tagoe is in a deplorable shape and the care taker, Daniel Larbie has called on the Ministry of Youth & Sport, the National Sports Authority, the Ghana Boxing Authority and promoters to help renovate to bring the gym to shape.

According to Coach Larbie, dad of the sensational juvenile boxer, Prince ‘The Buzz’ Larbie, the gym was once the best in Accra, but now its one of the worse because maintenance has not been the best, since the demise of the founder, and he needs support to get new and modern equipment.

He said the electrical fittings, ceiling, windows, doors, punching bags and others are all old, worn out, dirty and lose.

He stress that many top boxer started from the Will Power Gym and they have trained many boxers. He added that others doing martial arts also train there.

According to Coach Dan Larbie, he currently has five professional boxers, 20 amateurs and about 30 juvenile boxers, including his son, the rising star, Prince Larbie, who was recently voted Best Juvinile Boxer 2020 by the Boxing Writers Association Ghana (BWAG).

Prince ‘The Buzz’ Larbie is reputed as a fast rising talented kiddo boxer, and the new phenomenon in boxing to watch out for in Africa.

Larbie, the 8 year-old boy is traced to emerge from Ghana Boxing Village, Jamestown and has got amazing punches speed.

Larbie throws about 150 punches in 1 minute at very fast pace.

His father, who doubles as his manager disclosed to said he started developing interest in boxing at the age of two.

‘’Boxing is my life, while growing up, I’ve always had the dream to be a world Champion’’ Prince Larbie revealed.

He pleaded with Ghanaian who wish and want him to succeed to support in the renovation and equipping the Will Power Gym.

We need to hear from our MPs - Adomako Baafi on LGBT

U-20 AFCON: My players have a chance to write history- Karim Zito

Larabanga is 100% Muslim, with no church, gods - Native of Larabanga replies Obiri Boahen

Give us 1D1F - Association of Traditional Healers to Akufo-Addo

Criticise our decisions but don’t malign us – Judiciary tells media

Audit Service board in a ploy to frustrate Domelevo – Vitus Azeem

Over 2,000 refused entry to Ghana from Ivory Coast since January

Kuwait’s ruler swears in new government after clash with legislature

Parliament of Ghana needs more than 6,000 doses of vaccines – Bagbin

Homosexual is against our religious and cultural practice — Young Muslem vex

Ghanaians will suffer if LGBTQI is allowed, tolerated — Bishop Boateng

Association of Garages set March 22 for district and zonal elections

Facebook to end ban on political ads in United States

Speak against the injustice done to Domelevo – NDC organizer to Clergy, CSOs

Parliament will be effective under my watch – Bagbin assures

You're retired; thanks for your service – Akufo-Addo goodbyes Domelevo

You’re retired; thanks for your service – Akufo-Addo to Domelevo

'Criticise us as violently as you can but for Christ's sake, don't malign and insult us' – Supreme Court to media

One shot of the two-dose Covid vaccine can prevent serious illness, death

Love is rented not bought