There are some famously clichéd ways that people learn they are being cheated on.

Lipstick on the collar, partner glued to their phone, a feeling of unease that lingers thanks to their suspicious behaviour.

One woman, called Kayla, claims she realises the man she was seeing had another woman around after he sent a photo of his cooking.

To make it worse, the food didn’t look great either.

The 26-year-old shared the rather unfortunate moment she realised what was happening on TikTok, adding: “Got to do better my guy.” 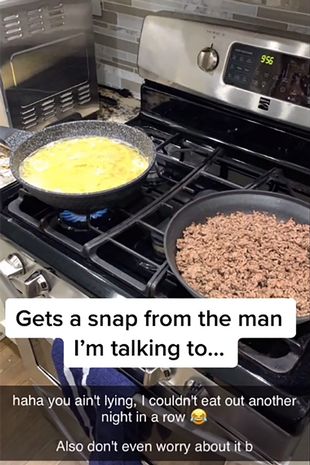 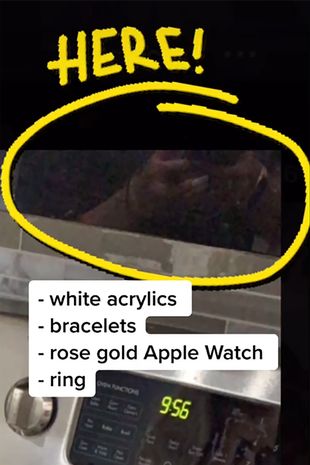 But it wasn’t the food she focused on – it was what she spotted in the reflection of the mirrored stove.

She zoomed in on the top left corner – where you can see a woman’s hands, along with her fake nails.

Kayla also noted that she was wearing bracelets, a rose gold Apple watch and a ring.

The video containing the heart-stopping moment has been viewed nearly 200,000 times.

Lots of viewers praised Kayla for her detective skills – as one admitted: “I wouldn’t have noticed that.”

Another added: “Don’t men know we are detectives?”

“Have you met this man in person because this screams Catfish?” asked a third.

Reality TV show Catfish exposed the truths and lies of online dating – and tracked down people faking their identities.

Online, a ‘catfish’ is a person who creates fake personal profiles on social media sites — usually pretending to be someone more attractive — by using someone else’s pictures and a fake bio.

Others were convinced that she’d made a mistake and that the man could be hanging out with a sister or relative.

She added: “When I asked who it was, he said it ‘should’ve been you’,” along with a skull emoji.

Others were more confused about what the man was eating – for those concerned, it turns out he was cooking spaghetti and ground beef.

Another commented: “Please let that girl know. I would be so upset if I cooked for someone else and then he sent it to someone.”

Two new investigations are being conducted against the President of Angers in the case of sexual violence
If Mbappe has any quality, it is modesty. Pochettino on the words of coach Metz about Kilian
Xavi will not negotiate with Barcelona until Koeman is sacked. He does not want to betray Ronald
Werner signed a preliminary contract with Bayern in 2019, but canceled the transfer after learning that Kovac and Salihamidzic were against his transfer
Carlo Ancelotti: Benzema has time to take the Golden Ball. He is like wine - the older, the better
Ronaldo's mother wants her son to return to Sporting. They adore Cristiano - and have already named an academy in his honor
Kepa deflected 7 shots in penalty shootouts for Chelsea, breaking the Czech record

US Authorizes Transactions With Taliban Related to Humanitarian Activities – Treasury

CDC: Most COVID-19 outbreaks in Arizona schools tied to no mask requirements

Merkel Urges Voters to Back ‘Stable’ Germany Under Union Bloc

The Hilla Limann Foundation Celebrates The 42nd Anniversary Of The 3rd Republic; A Dive Into History

“People Used To Compare Me To Animals Because Of My Looks”-Kumawood Actor, Agurugu Sadly Reveals [Video]

German Conservatives Still Behind Social Democrats 2 Days Ahead of Election

Another Daylight Robberies At Weija, Tema, Robbers Bolt With Cash

Residents Of Miotso Clash With Soldiers In Land Dispute

US Reaches Deal with Huawei CFO Meng to Resolve Charges

I am very passionate about my music

Watch: Escaped bull captured after two months on the loose in Long Island

I Was Expecting Jay Z To Comment On My Expensive Video Shoot Statement, Not Sadiq – Shatta Wale

The Hilla Limann Foundation Celebrates The 1st Anniversary Of The 3rd Republic; A Dive Into History

Peruvian Shining Path leader to be cremated at unknown location

I’ve never had a girlfriend; I’m still a virgin

Russia registers record high of 828 coronavirus deaths in one day

National cohesion and peaceful coexistence; a recipe for national development

Five climbers die in snowstorm on Mount Elbrus in Russia

ZoDF to partner STAR-GHANA in promotion of peace and security

Leaders of Australia, India and Japan gather for meeting with Biden

How did the politician become more important than the teacher – Pro. Gyampo questions

World Bank Riddled with Major Flaws: Doing Business Report is Just the Tip of the Iceberg

Britain to outlaw businesses from withholding tips from staff

“I Have A Crush On Afia Schwarzenegger And I Want To Break My Virginity With Her”-Rapper, Lefly Reveals [Video]

Pencils of Promise hands over classroom block to Akwamufie

Billy Eichner writes and stars in ‘Bros’ coming next summer