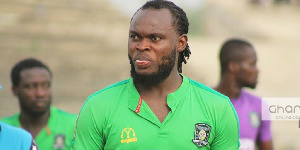 Aduana Stars striker, Yahaya Mohammed, has touted his free-kick credentials, ranking himself as number one in the country.

The experienced forward has been Aduana’s main source of goals in the last few seasons with a chunk of them coming from set-pieces.

Yahaya Mohammed has repeated the trend this campaign with 5 goals and just recently unleashed an explosive trademark free-kick during his side’s win over Legon Cities.

According to the former Ghana Premier League goal king, he’s the best free-kick expert in the country.

In an interview with Wontuki TV, Yahaya Mohammed said, “I’m the number one. He continued “There’s one guy at Ashgold, he’s also very good with his technique. Kwasi Donsu is also good… Isaac Kwain is also good but they will tell you that with my technique I am ahead of them."

“I am not bragging but they know it themselves that I am ahead of them when it comes to set-pieces."

“It’s a God-given gift and I have practiced severally. Thanks to Coach Paa Kwesi Fabin he’s thought me a few tips. If the ball is set up. I see it as a penalty,” he concluded.

Moreno has scored Villarreal's last 5 goals in La Liga. Best result at the club since Bakambu in 2017
Schalke have not won 10 matches and are last in the Bundesliga. They have 10 points in 24 games
Monchi apologized to Koeman for calling him a whiner. He also apologized to Messi
A player from the 3rd division of Guatemala was disqualified for 5 years for hitting a referee in the face
Benzema can play with Atletico. He returned to the general group of Real Madrid
Leeds midfielder Diaz: Ronaldinho is my childhood idol. He played with joy and spontaneity
Rivaldo: I would like to see Barca's epic comeback against PSG, but I don't believe it. Winning the Cup will not save the season